PSG left it late but held Arsenal to a 2-2 draw on a disappointing night at the Emirates. The French side now sit top of Group A thanks to goals from Edinson Cavani and a late Lucas Moura header via an Alex Iwobi deflection. The Gunners equalised and went ahead through an Olivier Giroud penalty and a Marco Veratti own goal.

The first half started slowly. Arsenal struggled to maintain possession and spent the majority of the opening exchanges camped inside their own half. PSG kept the ball well but struggled to really make any clear-cut chances. When it came, they only needed one. Thiago Motta was allowed to break forward uncontested and slid in Blaise Matuidi. The Frenchman was a late replacement for Angel Di Maria but had the presence of mind to put the ball in the path of the onrushing Edinson Cavani to slide it in with 18 minutes on the clock.

The first half drifted on slowly and quietly for Arsenal until it exploded with just a few minutes left. Mesut Özil came alive on the edge of the box and slid in Alexis Sanchez. The Chilean was brought down and the referee pointed straight to the spot. Olivier Giroud cooly converted but not before Cavani was caught on camera seemingly punching Aaron Ramsey. The referee didn’t see it but tension spilt over into the tunnel.

The second half was like a different match. The Emirates crowd got noisy and Arsenal began stringing passes together but it was PSG who came closest. Lucas Moura curled a free kick from 30 yards only to watch his effort flick off the crossbar and behind. Arsenal regrouped and the breakthrough came on the hour mark. The impressive Carl Jenkinson broke down the right wing and cut it back for Aaron Ramsey. The Welshman’s shot bounced off Marquinhos before hitting PSG man Marco Veratti and into his own net.

PSG had their own penalty shout a few minutes later but Edinson Cavani was told to get up by the referee after a challenge from Laurent Koscielny. The visitors got back into the match in the 77th minute. A deep Hatem Ben Arfa corner was headed back at goal by Lucas Moura and the Brazilian’s effort took a slight deflection off Alex Iwobi, taking it past the goalkeeper and into the back of the net. Edinson Cavani squandered a number of big chances late on and it finished 2-2 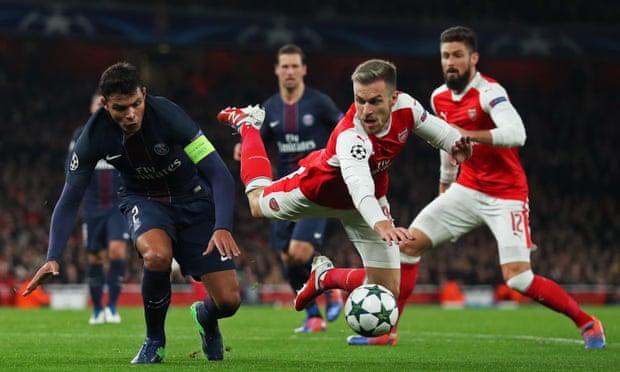 Made a number of excellent saves as well as a number of nerve-inducing passes. The Colombian played well on the whole and it’s difficult to blame him for either PSG goal.

He started slowly but grew into the match and shone in the second half. It’s important to remember that Jenkinson hasn’t played since January which makes his performance even more impressive.

Defended well and attacked with purpose. A good cameo.

Much like the previous match against PSG, the centre-back pairing struggled. Laurent Koscielny was caught out of position on a number of occasions and failed to cope with Edinson Cavani’s movement.

The German struggled alongside his defensive partner, failing to cope with Edinson Cavani and Lucas Moura. All of Shkodran Mustafi’s worst performances for Arsenal seem to have come in the Champions League.

It was a decent performance from Kieran Gibbs. The left-back attacked well but struggled at times with the blistering pace of Lucas Moura.