Arsenal ran out 4-0 winners against Swansea City after a dominating second-half performance in South Wales. Olivier Giroud and Alexis Sanchez scored either side of a couple of rather unfortunate Swansea City own goals created by Alex Iwobi.

Swansea may have won just one home match in the Premier League this season but they were the better side in the early exchanges. Kyle Naughton came close earlier on and Gylfi Sigurdsson had a couple of speculative efforts for the home team.

The gunners didn’t create anything until well after the half hour mark. Mesut Özil slid in Aaron Ramsey who played an excellent ball across the box for Olivier Giroud. The Frenchman stretched but couldn’t reach it but didn’t have to wait long for another chance. Alexis Sanchez picked up the loose ball after Ramsey’s cross and played it in for Mesut Özil. The German’s header hit a defender and Olivier Giroud knocked it past Lukasz Fabianski from close range. It was the fifth consecutive match Giroud has scored in but the Frenchman seemingly picked up a knock and was nearly substituted.

Swansea had a shout for a penalty a few minutes later. Ki Sung-Yueng latched onto a Llorente layoff and cut past Shkodran Mustafi before going down. There were a lot of hearts in mouths of Gunners fans but the referee went not to the penalty spot, but to Ki. The Swansea man was booked for diving, much to the annoyance of the home side’s fans and players.

The Gunners started the second half brightly. Swansea pressed on for an equaliser which afforded far more space up the field. Alexis Sanchez, Aaron Ramsey and Mesut Özil all came close but it was Alex Iwobi who made the difference. The Nigerian found space in the box and his low drive took a massive deflection off Jack Cork. The ball comically looped over a helpless Lukasz Fabianski and into the far corner. It was hardly a classic but Arsenal won’t mind.

Arsenal totted up another just twenty minutes later. Alex Iwobi again was the driving force as his low drive was steered into the back of the net by the helpless Kyle Naughton. Alexis Sanchez added a fourth a few minutes later, latching onto an Aaron Ramsey pass in the box before steering it past Fabianski. 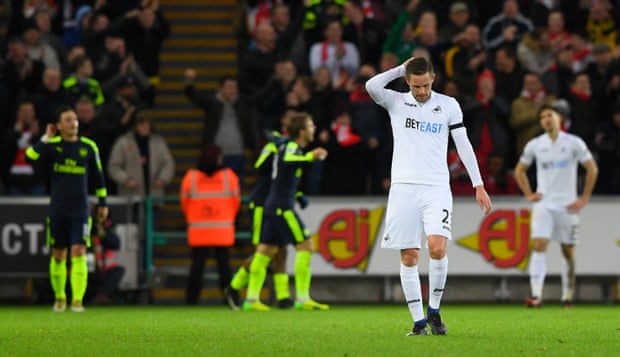 He saved everything put to him including a couple of impressive stops early on. A solid performance from Petr Cech.

He obviously lacks the attacking ability of Hector Bellerin but he put in a good performance. Gabriel Paulista was sound defensively and tidy in possession.

It was a good, dominating centre-back performance from Laurent Koscielny. He was quick to intercept and dominating in the air, a very good performance to celebrate his 200th Premier League appearance and brand new contract.

He looked more comfortable out there today. Shkodran Mustafi has been a little shaky since returning from his injury but was sound defensively and made some very good forward passes in the first-half.

Nacho Monreal was fine today. Arsenal’s full-backs were far more defensive than usual and the Spaniard was generally good. Nathan Dyer tested the 30-year-old early on but Monreal recovered well.