Arsenal slumped to a humiliating 2-1 home defeat to Watford on a terrible night at the Emirates. The visitors were two goals ahead within 13 minutes and a second half Alex Iwobi goal wasn’t enough to rescue a point for the Gunners.

Arsenal got off to a slow start at the Emirates. The Gunners conceded a number of sloppy free kicks on a rain-soaked night and both hurt Arsenal early on. Watford a free kick from 30 yards out and former Spurs man lined up to strike the ball. The centre-back’s shot took a massive deflection off Aaron Ramsey and past Petr Cech.

The Emirates was silent but it got even quieter a few minutes later. Gabriel Paulista’s throw-in was too long for Ramsey and Etienne Capoue seized on the ball. The Frenchman strode on unchecked and past a helpless Shkodran Mustafi. Cech saved the initial shot but it fell to an unmarked Troy Deeney who made it 2-0. Just as things didn’t look like it could get any worse for the Gunners, Aaron Ramsey seized up clutching his calf. The Welshman off for Alex Oxlade-Chamberlain to cap a nightmare 20 minutes for the home team.

The next 25 drifted by for the Gunners with little more than a whimper. Arsene Wenger must’ve been furious with his players at half-time and brought off Olivier Giroud for Theo Walcott.

It must’ve worked because the Gunners started off much better. Walcott, Alex Iwobi and Mesut Özil all forced good saves from Heurelho Gomes in the first 10 minutes of the half. It was Iwobi who gave the Gunners a route back into the match. Some excellent work from Alexis Sanchez on the right led to a crossing opportunity. The Chilean chipped it towards the back post for Iwobi to scuff into the bottom corner. Not the cleanest strike but Arsenal didn’t mind, they were back in the match.

Arsenal kept knocking on the door and threw on Lucas Perez for good measure. With Alex Oxlade-Chamberlain as the most defensive midfielder in the team, the emphasis was solely on attack. Perez came closest for the Gunners during the final stages but the game petered out and Arsenal’s title chances probably went with it. 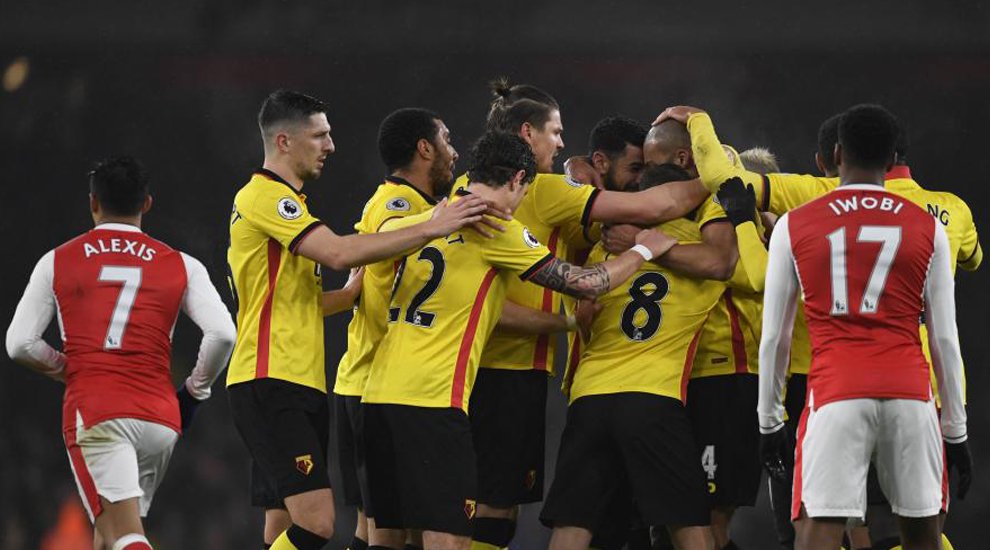 He made a good save for the second Watford goal but could he have put it into a less dangerous area? Petr Cech was certainly not the only man to blame for what was a woeful goal to concede. Didn’t put in his best performance though.

He was poor defensively and offered little going forward. This was by far Gabriel Paulista’s worst performance during his stint at right-back and given the return of Hector Bellerin, will probably be his last.

Far from Laurent Koscielny’s best performance for the Gunners. The Frenchman put some decent defensive work in but will be furious with the result.

He had a poor first 45 minutes and was rarely called upon in the second. His first defeat in an Arsenal shirt will sting and Shkodran Mustafi will be disappointed with his performance.

He can’t be blamed for either goal and was a threat in attack during the second-half. Nacho Monreal linked up pretty well with Alexis Sanchez at times and came close with a stinging volley.