Chelsea destroyed Arsenal 3-1 on another awful day for the Gunners at Stamford Bridge. Goals from Marcos Alonso, Eden Hazard and Cesc Fabregas gave the leaders a 3-0 advantage before Olivier Giroud pulled one back in injury time.

Arsenal started the match well. They pressed the Chelsea backline high up the pitch and even carve out a couple of opportunities. Alex Iwobi had a chance from the edge of the area but a deflection took it just wide of the far post.

The early good work was undone by Chelsea. Pedro broke clear down the right and his cross found the head of Diego Costa. The Spaniard was challenged by Hector Bellerin and his powerful header smashed off the bar and up. Amid the confusion, Chelsea capitalised. With the ball free in the air, defender Marco Alonso challenged an off-balance Hector Bellerin in the air and won it easily to make it 1-0. Bellerin was hurt in the challenge and was replaced by Gabriel Paulista.

Chelsea started to dominate the match. Eden Hazard and Pedro were constant threats to the Arsenal backline as Conte’s men looked to counter the Gunners at every opportunity. Wenger’s men were pegged back for most of the first-half but crafted the next big chance of the match. Mesut Özil found Alex Oxlade-Chamberlain on the edge of the Chelsea box and the Englishman’s cross evaded everyone. It found the head of sub Gabriel Paulista but the Brazilian put his free header straight into the hands of Thibaut Courtois.

Chelsea started the second-half the far better team and the killer goal came just before the hour. Eden Hazard picked up the ball on the halfway line and shrugged off a poor challenge from Francis Coquelin. If the alarm bells weren’t already ringing for Arsenal, they were when the Belgian squared up against Laurent Koscielny. Hazard eased past the Frenchman before finishing past Cech to seal the match.

The Blues made it three with just five minutes left but a broken Arsenal gave it to them. Literally. Petr Cech seemingly passed the ball to Cesc Fabregas on the edge of the box before the Spaniard slotted it over him.

Olivier Giroud pulled one back in injury time but it was too little, too late on an awful afternoon. 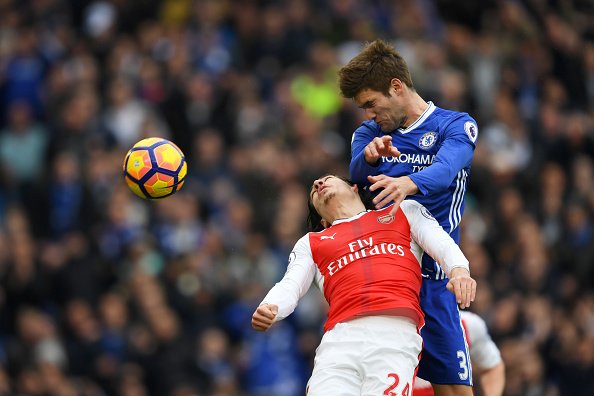 Awful performance. Petr Cech could’ve done better for both goals and fumbled a couple of relatively straightforward shots in the first-half, and that was even before the third goal. Cech did his former Chelsea teammates a favour when he passed to Cesc Fabregas to make it 3-0.

Was a little unfortunate to be left one-on-one with both Diego Costa and then an onrushing Marcos Alonso for the first goal. Started the game quite well but was subbed as a result of the goal.

He was thrown in at the deep end after the injury to Hector Bellerin but was pretty poor. Gabriel Paulista is not a right-back and this match really showcased that. The Brazilian missed a huge chance at 1-0 to get the Gunners back in the match.

He kept Diego Costa quiet for the majority of this match but looked like a schoolboy when up against Eden Hazard for the second Chelsea goal. Laurent Koscielny probably should’ve been better positioned for the first Blues goal as well.

He also missed a big chance in the air and will be disappointed with his performance. Shkodran Mustafi was the best performing defender but was relatively poor for his standards.

It was probably a tactical move from the manager but the full-backs’ high positioning really hurt Arsenal today. They’re playing against some of the most threatening widemen in the league but Nacho Monreal bombed forward every time and the Gunners were hurt by it.