Arsenal were destroyed by Bayern Munich for the second time in three weeks on a very familiar night at the Emirates. After an exciting first half performance which saw the Gunners find the net, Laurent Koscielny left the field – this time via a red card – and the Gunners collapsed.

On the pitch, things didn’t start much better on the pitch. Bayern Munich controlled possession as the Gunners struggled to get the ball forward. That changed before the 20-minute mark. Theo Walcott attempted to play the ball through for Olivier Giroud. The Englishman seized upon the interception and burst into the Bayern box. Forced out wide, Walcott had little to aim at but smashed his shot into the roof of Manuel Neuer’s net.

The Gunners continued to press forward in search of more goals. Theo Walcott came close with a near-identical strike from close range but the home side couldn’t quite find the final pass. The crossing was a particular disappointment with a number of misplaced balls in dangerous positions.

The first half came to a close with a surprising level of positivity at the Emirates and it carried through to the second. The Gunners pushed forward in search of another goal and Bayern hit back. Robert Lewandowski was left unmarked and bumbled to the ground after a push from Laurent Koscielny. The referee pointed to the spot and showed the defender a yellow card before later changing his mind and showing a red.

Lewandowski made it 1-1 and the Gunners crumbled, just like they did in Munich. Giving the ball away on the edge of their own box and having a defensive line which resembled a Jackson Pollock painting. Bayern were rampant and just like in Munich, the goals flowed.

One from Robben, One from substitute Douglas Costa and a late brace from Arturo Vidal made it 10-2 on aggregate. The worst home defeat in the history of Arsenal Football Club. 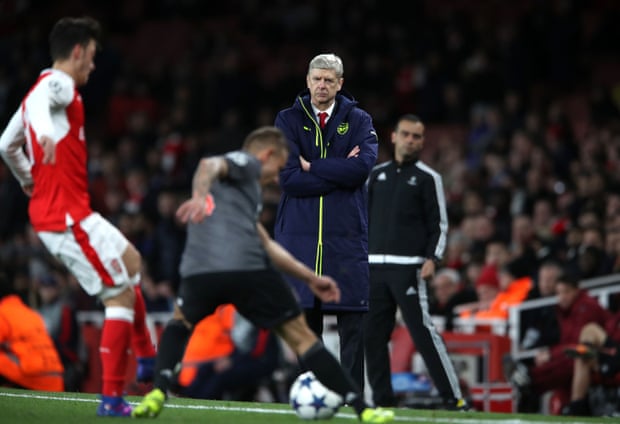 The Colombian conceded five goals to Bayern Munich yet again but it was a marginally better performance than in the first leg.

He played fairly well. Hector Bellerin defended well and was a constant threat going forward. The Spaniard was at his aggressive best, gliding up and down the Arsenal right.

He put in a good performance before his dismissal. Laurent Koscielny battled well against Robert Lewandowski and has a right to feel aggrieved about his red card.

He played well for the first 50 minutes but crumbled after that. Shkodran Mustafi battled well and really showed off his ability on the ball. There was one through ball for Theo Walcott in particular which would’ve been impressive even for a playmaker. However, he looked like a semi-professional for the last 25 minutes.

A decent performance from Nacho Monreal. He did a lot better against Arjen Robben this evening than he did in Munich. His performance levels dropped in the last 30 minutes but he’s not alone in that regard.