Liverpool turned on the style for fifteen minutes and saw off Arsenal in another opening day defeat for The Gunners.

It seems a long time ago but Arsenal started the game quite well. They got the better of the two teams and looked comfortable for the first 40 minutes. Theo Walcott was brought down by Alberto Moreno but then missed the penalty. The winger only had to wait 67 seconds for redemption, latching onto an Alex Iwobi pass and slotting the ball into the far corner. Rob Holding was penalised for a soft foul late on in the first half. Philippe Coutinho curled the resulting free kick into the top corner from at least 30 yards and the sides went into the break at 1-1

Liverpool were a different team in the second half and tore Arsenal apart in ten second half minutes. Georginio Wijnaldum crossed for an unmarked Adam Lallana at the back post. Eight minutes later and Nathaniel Clyne whipped the ball across for the on-rushing Coutinho. Sadio Mane made it 4-1 with an incredible solo goal a few minutes later, taking it inside Chambers and Monreal before smashing the ball into the top corner.

Alex Oxlade-Chamberlain was brought on and got a goal back for The Gunners. He cut in from the left, took it past Clyne and his shot took a deflection past the observing Simon Mignolet. Calum Chambers made it 4-3 in the 75th minute after flicking in a Santi Cazorla free kick. Arsenal had 15 minutes to find an equaliser but rarely threatened the Liverpool goal and the score finished 4-3 to the visitors.

Here’s how we rate the Arsenal performance: 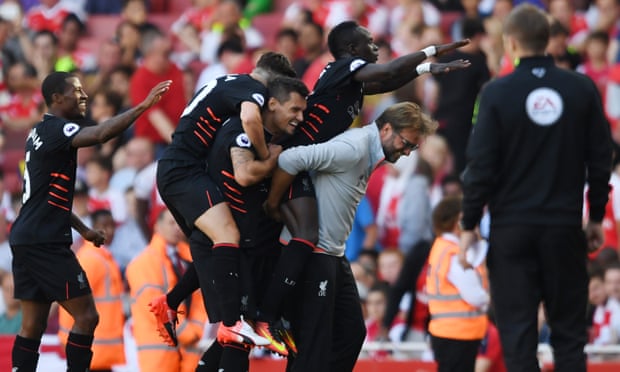 A few comfortable saves in the first half but responded well. Good distribution. Probably harsh considering the quality of the goals but the Czech will obviously be furious with himself for conceding four.

Decent on the ball, broke forward a number of times and played on his toes. One of the few players to come out of this with a reputation in tact.

Didn’t look out of place in the Arsenal team for large parts of the game. Gave away the free kick for Coutinho’s goal but the decision was a little harsh.

A bit of a mixed bag for Calum Chambers. He shepherded young Rob Holding, got a goal, but gave the ball away a number of times and was part of a defence which conceded four goals.

Was out of position for the second Liverpool goal and could only watch Mane dribble past him for the fourth. A poor few minutes for the Spaniard but not a terrible performance.