It’s the opening match of the 2016-17 Premier League season and there is the regular mix of excitement and nervousness ahead of the new term. The first match couldn’t be much bigger as The Gunners take on Liverpool at the Emirates Stadium later today. With Manchester City already having three points on the board it’s crucial that Wenger’s men get something from the match.

The two sides shared two draws in the Premier League last season with the Emirates fixture finishing 0-0. Arsenal have won 3 of the last 4 matches between the two sides at the Emirates and The Reds have beaten The Gunners away from home just once since 2000.

The last fixture between the two sides saw the beginning of a downwards spiral for The Gunners. Joe Allen grabbed a last minute equaliser at Anfield in a match which finished 3-3. Arsenal failed to win their next three matches and slipped from 1st down to 4th.

It’s the first time Jurgen Klopp has taken a side to the Emirates Stadium since he watched his Borussia Dortmund side get beat 2-0 back in 2014. Alexis Sanchez got a goal that night and the Chilean could well start up front later today.

Arsenal are of course without a host of first team defenders ahead of the big match. Per Mertesacker and Gabriel Paulista face lengthy injuries while Laurent Koscielny is still not match fit after the European Championships. Mesut Ozil and Olivier Giroud were also given extended breaks and are not expected to feature.

Reports have started to emerge that Granit Xhaka and Santi Cazorla could be dropped in preference of Francis Coquelin and Mohamed Elneny. It’s hard to remember a season when there was so much disagreement over the Arsenal starting lineup which can only be a good thing. 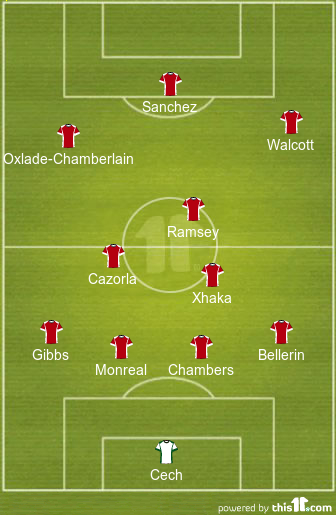