Arsenal have reached a record 20th FA Cup final after a 2-1 comeback victory against Manchester City at Wembley. Alexis Sanchez and Nacho Monreal found the net after Sergio Aguero put City a goal up.

Arsene Wenger named an unchanged team for this crucial FA Cup semi-final with Manchester City. That meant a couple of key players on the bench and a new-look formation being tested by one of the best sides in the country.

There were some teething problems with the 3-4-3 formation as City looked to press high up the pitch. Some of the Arsenal players were shown to be arguing on the pitch as they were clearly a little unsure how to handle things. Fortunately, City didn’t really know either.

Arsenal grew into the match and had the ball in the net just before the 25-minute mark. Olivier Giroud headed one through for Laurent Koscielny who found the far corner but the Frenchman’s effort was rightly ruled offside.

City had their own goal ruled out later in the match after the referee claimed the ball had gone out of play. A couple of Arsenal players stopped at the whistle’s call but City played on and got the ball in the net. Replays showed the the ball didn’t quite go out completely and that was the high point of drama during a subdued first half.

The second half started much like the first. A closed off game which was in desperate need of a goal and it eventually came for Manchester City. A couple of basic mistakes from Arsenal and Guardiola’s men made them pay. Aaron Ramsey gave the ball away high up the field and City played a long pass for Sergio Aguero who was the wrong side of Nacho Monreal. Aguero broke clear and made it 1-0, chipping the ball delicately over an onrushing Petr Cech.

It didn’t stay that way for long. Less than ten minutes later and the Gunners were equal. Alex Oxlade-Chamberlain played in a fantastic cross to find Nacho Monreal on the end of a marauding run from Nacho Monreal. The Spanish full-back hit it past Claudio Bravo with his right foot to make it 1-1.

City hit back and saw two efforts hit the woodwork. Fernandinho climbed highest from a corner and hit the bar just a few minutes after Petr Cech made the save of the match to tip Yaya Toure’s volley onto his post. The Gunners had a few chances of their own before the end of 90 minutes. Danny Welbeck came closest but his shot just spun past the far post.

In extra time, the Gunners started taking command. City looked tired and Arsenal started to capitalise. Rob Holding came close from a header before the Gunners did take the lead. A ball in the box and Danny Welbeck’s skewed shot fell to the feet of Alexis Sanchez. The Chilean effortlessly cut inside one City defender and found the back of the net from close range.

The Gunners saw the game out after that. Francis Coquelin was brought and barring a few fruitless counter-attacks, Arsenal were comfortable and reached a historic 20th FA Cup final. 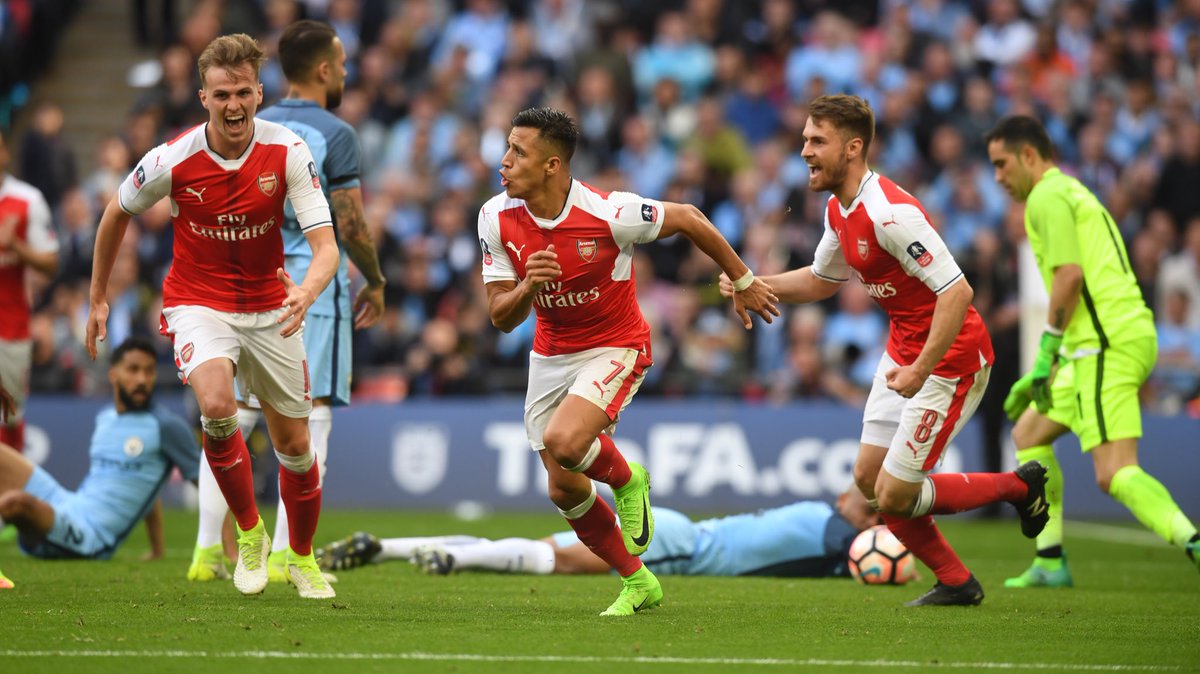 He did what was expected but he had a very quite match on the whole. Petr Cech made a couple of decent saves and could do very little about Sergio Aguero’s goal.

This was probably Gabriel Paulista’s best performance for Arsenal. The Brazilian was dominant at the back and looked more comfortable in this new-look formation. He was solid in the air and did brilliantly well when left one on one with City’s nimble attackers.

A solid defensive performance on the whole. Laurent Koscielny kept City quiet for large spells of the game despite their impressive front line.

An excellent performance from Rob Holding. For such a young player, he didn’t look out of place in a team playing in an FA Cup semi-final and nearly found the back of the net with a header from a corner. He dominated in the tackle and was very impressive on the ball too.