Arsenal ran out 3-0 winners over West Ham after a fantastic second-half from the Gunners. Goals from Mesut Özil, Theo Walcott and a late stunner from Olivier Giroud helped the Gunners to all three points.

The game started slowly with much of the attention being drawn towards the empty seats at the Emirates. There were quite a few and with reports that anti-Arsene Wenger protesters were due to miss the first 13 minutes of the match – one minute for every year since Arsenal have won the title – the game decided to follow suit.

Very little happened until just shy of the 20 minute mark when the Gunners had a major penalty shout. Theo Walcott was knocked over in the box after knocking the ball past the West Ham defender but the referee waved play on. Danny Welbeck nearly broke the deadlock a few minutes later but he couldn’t find enough contact on Alexis Sanchez’s chipped free-kick.

The Gunners created a couple of half-chances during the remainder of the first-half but could not find the net. The second 45 started and Arsenal didn’t take long to almost find the breakthrough. Alexis Sanchez played a fantastic reverse pass for Mesut Özil which seemed to take everyone – the German included – by surprise. Arsenal’s number 11 couldn’t find the right tough and the chance was lost.

The German didn’t have to wait long for another chance. Özil picked up the ball on the edge of the box and with both Alexis Sanchez and Danny Welbeck cutting across the goalkeeper, he shaped for a cross. Whether it was an accident or a stroke of genius we may never know but Özil’s cross-shot bobbled into the far corner of Darren Randolph’s net.

The Gunners almost made it 2-0 a few minutes later. Theo Walcott made a mazy run through the centre of the park and slid in Danny Welbeck but the former Manchester United man’s shot was saved well by the onrushing Darren Randolph.

Just ten minutes later and the Gunners did make it 2-0. Mesut Özil linked up well with Alexis Sanchez down the Arsenal left and found some space. The German played an excellent cut back for Theo Walcott to sweep it home.

The Gunners weren’t done either. Arsene Wenger will be pleased after his substitutes linked up to find Arsenal’s third of the evening. Alex Oxlade-Chamberlain effortlessly burst past the West Ham defence down the right. He slid the ball into the path of Olivier Giroud who checked back onto his left foot and curled a wonderful shot into the far corner of Darren Randolph’s net. 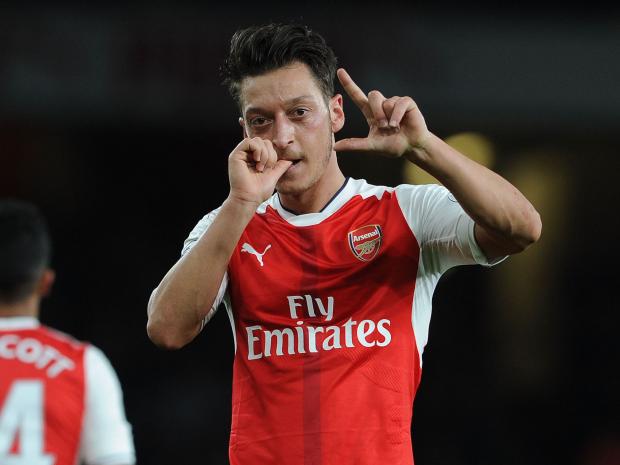 ‘Composed’ is the word which comes to mind when thinking of Emiliano Martinez’s first Premier League start since 2014. The Argentinean didn’t have a great deal to do but made one very good stop to deny Manuel Lanzini and looked comfortable on the ball throughout.

A good performance from Hector Bellerin. The Spaniard didn’t have the busiest match defensively but attacked well and very nearly got himself on the scoresheet.

Standing in for Laurent Koscielny was never going to be easy and Gabriel Paulista did okay. The Brazilian gave possession away a couple of times but defended pretty well on the whole.

A good performance from Shkodran Mustafi. He defended just as well as his fellow centre-back but looked much more comfortable in possession.

The Spaniard didn’t have a great deal to do defensively and spend much time in the opposition half. Nacho Monreal was a constant option but his final ball was lacking.