A more recent recollection for today’s edition; an away trip to beautiful Bolton in 2008. The Gunners were coming to the tail end of their most promising title chase since winning the Premier League trophy in 2003/04, but setbacks suffered in the Spring had seen them stumble badly and they arrived at the Reebok 6 points adrift of leaders Manchester United. Infuriatingly, the Arsenal had failed to win in the 5 Premiership outings since Eduardo’s leg had been snapped in two by a Birmingham City ‘reducer’.

To say that Arséne Wenger’s troops began poorly would be the understatement of the season. Less than a quarter of an hour had gone by before the Trotters opened the scoring, as Matthew Taylor was allowed to ghost in at the far post to head home a deep cross from Grétar Steinsson. The defending was dismal all-round: Gael Clichy had failed to even attempt closing down Steinsson, while the aerially-formidable Kolo Touré, Phillippe Senderos and club captain William Gallas – yes, that happened, it wasn’t just a terrible nightmare – all conspired to allow the ever-irritating Taylor the freedom of the Arsenal box.

Desperation took hold in the deluge, as Abou Diaby dived in attempting to win the ball from Steinsson…but only succeeded in catching the Bolton player with his studs. Some footballers might get lucky and only receive a yellow card accompanied by a stern warning from the referee. Diaby was not such a player. Chris Foy showed absolutely no hesitation in reaching for the red card, and the Arsenal day was going from bad to worse. 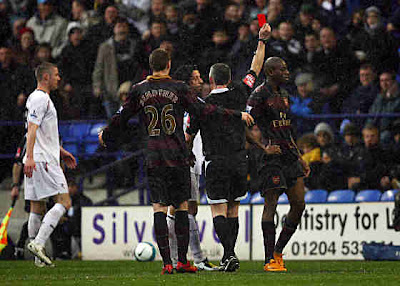 The Gunners needed to ensure that they didn’t concede again before half-time. Stay resolute, compact, keep it tight, do the basics; that’s what every coach would hammer home to the 10 men left on the field. So, of course, Matthieu Flamini was caught in possession on the edge of his own area, and as Taylor unthreateningly sidefooted the ball toward goal Gallas decided to turn his back on the shot. Predictably enough, the speculative effort flicked off of Gallas’ heels and crept past Manuel Almunia.

With half an hour to full time, any sort of comeback looked incredibly unlikely. However, Wenger then did something that he is often criticised for doing far too seldom; he changed things. Taking off Bendtner and Senderos, he replaced them with Adebayor and Walcott, switching to a back 3 in the process. The added attacking impetus paid dividends almost instantly, as the Bolton defenders failed to properly pick up the Gunners at a corner, giving Gallas the opportunity to drive the ball home from close range.

Barely 5 minutes later, Alexander Hleb was brought tumbling to the floor in Bolton’s area while trying to reach the rebound from a Flamini strike. For the second occasion that day Foy needed no time to make a decision, and he instantly pointed to the spot. Robin van Persie nervelessly dispatched the penalty, so from down and out with 30 minutes left to play the 10 men of Arsenal were suddenly level with 68 minutes on the clock. An unbelievable turn of events, scarcely credible based on the first half performance.

A winner now seemed inevitable, as the visibly shellshocked Bolton players crumpled in the rain. Nonetheless, the Gunners always keep their fans waiting, and as the match entered stoppage time it looked like this was to be 6th consecutive league game without a win. The travelling faithful had seen an exceptional display, but that would be scant consolation for slipping still further behind United and Chelsea…

Clichy gets the ball from Gallas, and plays a straight pass into the channel for Hleb. He’s into the box and looks up, cutting the ball back from close to the byline for Cesc Fabregas. Cesc hits the ball first time with his instep as Ivan Campo dives in, and it’s a bit of a mishit; probably not even going out for a goalkick but rather a throw-in, it’s so bad. Then it ricochets off one Bolton defender, then another, and the Arsenal have won.

The winning goal was eventually – correctly – adjudged to be an own goal by Jlloyd Samuel, but who really cares? In that moment, with Cesc’s face the picture of relief, joy, respite and ecstasy, not one Gooner watching would have given even the tiniest of tosses.