With players returning from injury and an almost fully fit squad available to choose for the boss, the key aspect for Wenger to address is balance.

Against Spurs, the balance of our side was all wrong; whilst we remained solid defensive for most parts of the game, we couldn’t get out of our half with the ball and have our own period of sustained pressure.

This could be down to many reasons, in the middle, Aaron Ramsey didn’t seem comfortable in possession and under pressure from Spurs’ midfield, only completed 70% of his passes.

The lack of pace up front is a worry too when away from home, Olivier Giroud struggles to offer any kind of outlet due to his lack of mobility. It allows opposition defence to squeeze up and for our game to become limited. Pace in wide areas is also key when trying to relieve pressure and carry the ball forward.

Therefore, the inclusions of Danny Welbeck and Alexis Sanchez may be vital in the coming weeks, and due to his industry in possession and the poor season Ramsey has had, Jack Wilshere may be set for a run in the team.

On paper, the guile of Wilshere next to the disciplined Francis Coquelin seems like a wonderful partnership, and a return to the former 4-2-3-1 should be re-installed.

Therefore, this is the Arsenal team which I would start with for the remainder of the season; which can obviously be tweaked due to rotation and injury concerns. 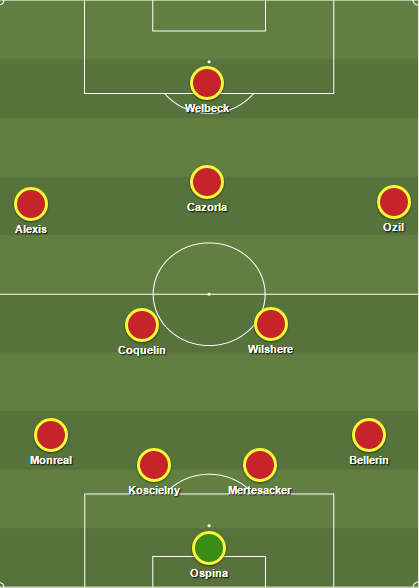 David Ornstein: Danny Welbeck Has Made A Secret Arsenal Return