Arsenal take on Swansea City at the Emirates in the first match after the international break. The Gunners will be hoping to pick back up where they left off before the break, while it is something of a new dawn for Swansea City.

Many neutral eyes will be aimed at the visitors for this fixture as Bob Bradley oversees his first match in charge of Swansea City. Bradley is the first American to ever manage in the Premier League and there is a feeling that it will either be a masterstroke or a disaster for the Welsh side. Swansea are on a poor run of form and sit outside the bottom three on goal difference.

The fixtures have been unkind to the Swans with matches against Chelsea, Leicester, Liverpool, and two matches in three days against Guardiola’s Manchester City. The Swans scored at least one goal in each of those fixtures and were a little unfortunate not to get more than a point from them.

Arsenal meanwhile are unbeaten in nine matches and are on fine form. The Gunners seem to have found a team that works with Theo Walcott and Alex Iwobi playing either side of Alexis Sanchez up front. The Chilean might not play against the Swans so it’s up to the home side to adapt.

Based on recent results between the two clubs, Swansea should win. The Welsh side has enjoyed much success against the Gunners in recent seasons, particularly at the Emirates. The last four Premier League matches between the clubs at the Emirates have resulted in one draw and three wins for the Swans. 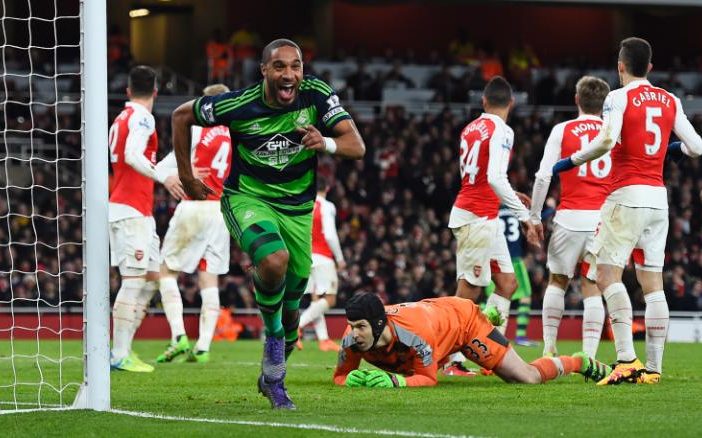 Arsene Wenger discussed in the week how much of a blow last season’s defeat to the Swans was. Goals from Wayne Routledge and Ashley Williams helped the visitors to a 2-1 victory, effectively ending the Gunners’ title hopes in the process. Arsenal need to be wary of the recent history of this fixture. Add to that the boost clubs usually get under a new manager and this could be a difficult fixture for the Gunners.

Bob Bradley took an opportunity to praise Arsene Wenger in the run up to the fixture. The Gunners boss has obviously celebrated his 20th anniversary in charge of the club and it’s a fact which isn’t lost on Bradley.

“I have had the chance to coach against some pretty big names,” Bradley said at his pre-match press conference, “[Fabio] Capello, [Vincente] Del Bosque – but Arsene is right there with the top managers.

“To be with a club for 20 years where the football that’s been played is such a reflection of the man, this is a fantastic thing.”

The American also seems to have done his homework on the recent history of this fixture.

“I’m very aware of it [the record] and the part I love about that is we can go there with confidence,” Bradley confirmed.

“We have guys who have won there before, but we have to play well. All the details need to be right.

“And I’ll always go back to the idea of going there to play, to have confidence on the ball. You’ve got to have the confidence to have people in front of the ball, to create advantages.

“That will be the football test. We can talk about it all week but it’ll come on the day when we’re on the ball.”

Wenger spoke highly of his adversary during his pre-match conference too, addressing the scepticism which some people have over an American managing in the Premier League. “I think Bob Bradley has a lot of experience, he’s not a beginner,” Wenger said. “He has travelled a lot, he has accumulated experience in the States, he has been in Egypt, he has been in France just recently and he is coming to England in what is certainly for him a fantastic opportunity.

Wenger was then asked about that scepticism, and whether winning games was the best way to put that to bed.

“Yes, just after playing us it’s the best way to deal with that but I believe you do not want to create scepticism because of where a person is from. What is important is that you’re qualified for the job no matter where you’re from.”

Regardless, it will be a huge moment in Bradley’s career. The first American to manage in the Premier League and he is perhaps the embodiment of the growth of football in the States.

“Yes, I will take a few seconds to look around, look into the stands and then very quickly get my mind back on the game,” Bradley went on.

“I won’t take a long time but without a doubt. I say the same to the players, then you put it away and get yourself ready for the whistle.”

Arsenal’s long-term absentees are still out and there was bad news on the injury front with the setbacks to Aaron Ramsey and Olivier Giroud. The pair will miss another couple of weeks but the Gunners have been boosted by the returns of Francis Coquelin and Lucas Perez. However, Alexis Sanchez played for his country just a few days ago and it’s uncertain whether he will be fit enough to start.

For the visitors, Bradley should welcome the return of defender Federico Fernandez but the match against Arsenal will come a little too soon for a couple of his players. Fernando Llorente and Jefferson Montero are still out, while Nathan Dyer isn’t expected to return until next month.

The Gunners are unchanged from the side which got past Burnley last weekend. Granit Xhaka and Santi Cazorla keep their places in midfield while Alexis Sanchez stays up front despite playing 90 minutes for Chile on Wednesday.