Arsenal travel to the King Power Stadium to take on last season’s champions Leicester City. It’s the second match of the Premier League season and last season’s top two both need a win to get back on track. Both teams start the match six points behind their rivals and need to respond if they are to repeat last season’s feats.

Arsenal were the only side to take six points off last season’s unlikely Premier League champions and The Foxes will want revenge. Further tension is added to this fixture following The Gunner’s pursuit of two of Leicester City’s key men from last season, Riyad Mahrez and Jamie Vardy. The pair have elected to stay at the club and will undoubtedly start the match.

The Foxes’ record against The Gunners is anything but positive. They haven’t beaten the North London club in Leicester since way back in 1994 which, incidentally, was their only victory over tonight’s opponents in the last 27 meetings – a run stretching back to 1983.

All signs point to an Arsenal win but nothing is ever certain with this club. Arsene Wenger’s men will need to drastically improve their defending if they are to cope with Leicester City this evening. The Foxes were anything but impressive last weekend but will undoubtedly up their game in front of their own fans tonight.

Laurent Koscielny should come back into the Arsenal starting lineup tonight following his extended leave after the European Championships. Alex Iwobi and Aaron Ramsey are the biggest absentees, the pair will be out of action until next month through injury. We expect that Mesut Ozil and Olivier Giroud to start the match from the bench and be called into action only if required. Alexis Sanchez should keep his place up front alongside Theo Walcott and Alex Oxlade-Chamberlain. 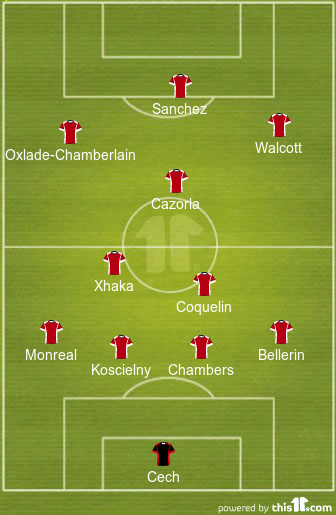