Arsenal take on Sunderland at the Stadium of Light in a couple of hours and will be looking to get back to winning ways after the result against Middlesbrough last time out. The Gunners could be without a host of first-team players but will be hoping to have enough in reserve to get past a struggling Sunderland.

Arsenal come into the game on the back of 9 wins from 10 matches in all competitions and have to be considered firm favourites. The Gunners have also kept an incredible 7 clean sheets in their last 8 games and scoring hasn’t been a problem either with 25 goals in that time.

The home side meanwhile aren’t quite on the same trajectory. The Black Cats sit rock bottom of the Premier League table with just two points all season. Sunderland haven’t scored a goal in three matches and are firm favourites for relegation this season.

This was supposed to be a new dawn for Sunderland FC. For years the club has loitered around the bottom three, completely content to finish in 17th place each season. The appointment of David Moyes was a signal of intent. The former Everton and Manchester United boss needed to rebuild his reputation but unfortunately for him and Sunderland, that hasn’t happened so far.

Arsene Wenger certainly isn’t taking Sunderland for granted. He used his pre-match press conference to identify the Black Cats’ strengths from set pieces and counter attacks, as well as picking out Jermaine Defoe as the side’s main threat.

“Yes, you have to honestly admire Jermaine Defoe for what he has done.

Wenger also had time to speak about his adversary for today’s match. “David Moyes is an experienced manager who I think has 15 seasons in the Premier League,” he said, “so I think he will adapt to the strengths of his team and certainly they will defend very well and attempt to catch us on the break and maybe from set pieces.”

David Moyes meanwhile was certainly aware of the significance of the match for Sunderland. The Black Cats need a win to get back in touch with their relegation rivals but Moyes knows it will not be easy.

“We need to try and get some opportunities ourselves too and cause them some problems too, Moyes said in his pre-match press conference, “It is easier said than done. You are playing against a level of team that are above us.

“You’d hoped to have got a win from somewhere before it got to Arsenal, but this is a game where most people would think it was a difficult game for us whether we were sitting mid-table or bottom.” 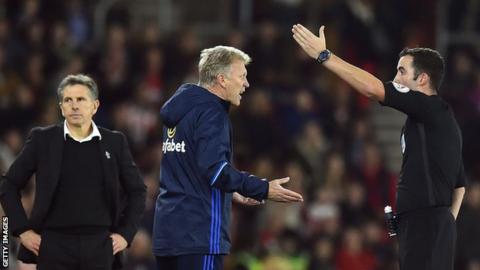 The two sides could barely be further away from one another in the table but with the injuries to both sides, it’s still very difficult to predict.

“We want to get the wins to get us started but the players are aware of that as much as I am. I have tried to tell them there have been some good things in the past few games, we are not kidding each other, though.

“This is a really difficult game against Arsenal.”

Both sides are without a host of first-team players. The Gunners are obviously missing Per Mertesacker and Danny Welbeck, but now Arsene Wenger will be without Lucas Perez for the next couple of months.

The visitors could also be without the trio of Santi Cazorla, Nacho Monreal and top scorer Theo Walcott. All three are facing late fitness tests for the clash but Wenger is optimistic that the injuries are not serious.

For Sunderland however, things are a little worse. Jason Denayer and Adnan Januzaj could return for the match, but the Black Cats will definitely be without a host of first-team players. Sebastian Larsson and Fabio Borini are long-term layoffs, and Moyes will also be without Lee Cattermole, Jan Kirchhoff and Vito Mannone for the visit of the Gunners.

Unlike Theo Walcott or Nacho Monreal, Santi Cazorla was pictured in full training yesterday so we expect the Spaniard to start the match. Alex Oxlade-Chamberlain and Kieran Gibbs should come in for the pair and we expect Wenger to keep both Olivier Giroud and Aaron Ramsey on the bench for the time being.

The Gunners have won their last three away matches