Olivier Giroud completed an extraordinary comeback for the Gunners at Bournemouth. Giroud, Sanchez and Lucas Perez scored one each as Arsenal came back from 3-0 down to secure a point on the South Coast.

Arsene Wenger surprised a few by electing to start Aaron Ramsey in the number 10 role rather than on the right as was expected. The Gunners started brightly but it was Bournemouth who went ahead. Hector Bellerin was drawn infield and a quick switch from the right allowed Charlie Daniels space on the left. The dangerous full-back cut inside Bellerin and slotted it past Cech.

Seemingly rocked by that early blow, the Gunners failed to settle. Francis Coquelin lost the ball and the Cherries were in. Ryan Fraser carried the ball out wide but Arsenal’s Granit Xhaka challenged the midfielder. The referee pointed straight to the spot and Calum Wilson knocked it past Cech.

The Arsenal players looked furious with one another as the first-half drifted by with little more than a whimper. Aaron Ramsey came closer than anyone for the visitors but his quick turn and shot was deflected wide.

The Gunners started the second half brightly but failed to create any clear chances and the home side took advantage. The impressive Charlie Daniels played a hopeful ball down the line for Ryan Fraser on the left. Hector Bellerin was the favourite but seemed to be jogging towards it. Fraser barged the Spaniard off the ball before putting the ball past Petr Cech. It was probably a foul but Arsenal only had themselves to blame.

The Gunners were given a glimmer of hope after the hour. Olivier Giroud flicked a cross on to the back post for none other than Alexis Sanchez to make it 3-1.

The Gunners seemed like a different side after that. Alexis Sanchez drove his teammates on but it was Olivier Giroud who made another assist. The Frenchman flicked the ball up for Lucas Perez but the Spaniard still had a lot to do. He let the ball come over his body before unleashing an unstoppable volley into the far corner.

Olivier Giroud was the name on every Arsenal fan’s lips as he completed the comeback late on, glancing a header into the far corner. There wasn’t enough time for a winner but given the position the Gunners were in, one point felt like three. 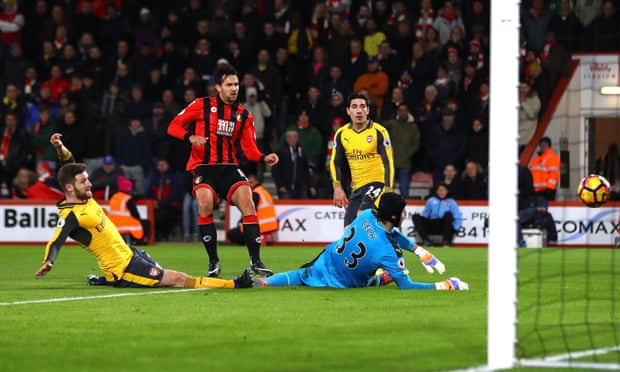 He made a couple of decent saves but still conceded three goals. He perhaps could’ve done better for the third one too.

He was caught wildly out of position for the first Bournemouth goal but that was probably more Aaron Ramsey’s fault than his. Still, the Spaniard was a passenger as Daniels made it 1-0. Bellerin was also a spectator for the third to cap one of the youngster’s worst performances in an Arsenal shirt.

He was pretty good during the match before his substitution after the hour. Strange to see the Frenchman replaced at the stage.

He was solid at the back.

Maybe the German was brought back too early but centre-back was terrible today. Shkodran Mustafi was error-prone, rash and his decision-making was appalling. A woeful outing.

He was poor during the first hour but grew in stature as the game went on. Nacho Monreal was an attacking threat during the last 20 minutes.