The Gunners lost 3-0 to Chelsea in their fourth match of pre-season after a two-minute horror show at the end of the first-half.

The Gunners started the match sloppily. Arsenal gave the ball away a number of times with the first big chance of the match coming just before the seventh minute. Ainsley Maitland-Niles followed up an excellent tackle on Pedro with a poor error a few minutes later. He handed the ball straight to Willian who ran clear but cut his shot wide of the far post.

The Gunners had some good opportunities in a first-half when Chelsea were the best team. Aaron Ramsey hit one wide but the Blues came closest early on through Michy Batshuayi. Cesc Fabregas slid it across for the Belgian to finish but the assistant referee had raised his flag. Replays showed that Batshuayi was onside but the Blues didn’t have to wait long for retribution.

Batshuayi did some excellent work on the halfway line before finding Willian on the Chelsea left. The Brazilian squared up with Nacho Monreal who showed him inside and onto his right foot. The winger didn’t need another invitation to cut inside and curl the ball into the far corner of the net.

Less than two minutes later and it was 2-0. The Gunners gave the ball away in defence sloppily, allowing Michy Batshuayi to bring the ball forward and score a very similar goal.

The Gunners made a host of substitutions at half-time but things didn’t exactly change. Within 10 minutes of the break, the Blues were three ahead. Marco Alonso got past Oxlade-Chamberlain with ease down the Chelsea left before cutting the ball back for Michy Batshuayi. The Belgian had an excellent game and swept the ball into the top corner from the edge of the box.

The game petered out in the second-half as a result of the scoreline and the host of changes from both sides. It was effectively under-23 match with a few first-team stars scattered around the pitch. Unfortunately, things didn’t exactly change that much. The Gunners looked a little better offensively in the second 45 minutes but couldn’t find a way through the Chelsea back line despite its numerous changes.

David Ospina didn’t do a great deal. There was one save of note for the Colombian who conceded three goals and could’ve seen some punishment for a flying challenge on Chelsea’s Pedro.

It was Ainsley Maitland-Niles’ worst performance for the Arsenal first-team thus far. The youngster was given a torrid time down the right and gave the ball away regularly.

The defence looked far better with Laurent Koscielny a part of it. Arsenal’s right flank was targeted by Chelsea in the first-half but stood up to the test when the Frenchman was playing.

He was okay. Per Mertesacker had a tough first-half but did his best to shepherd the back three. He was the best of the trio but the bar wasn’t very high.

He did okay at centre-back again. Mohamed Elneny was decent on the ball and looked a little better positionally than the man he replaced.

A poor performance from Nacho Monreal. His positioning was poor and his one-on-one defending was even worse.

He did okay. Sead Kolasinac will more likely be played as a left wing-back but he’s done well at centre-back. The Bosnian was decent in possession and okay defensively.

He was very eager on the ball but things didn’t quite work out for Alex Oxlade-Chamberlain down the Arsenal right. His defensive work was solid – barring that disastrous error for the third Chelsea goal – but he didn’t have much success offensively.

He did well. Reiss Nelson was fine defensively and really attacked the Chelsea back line when he had the ball. 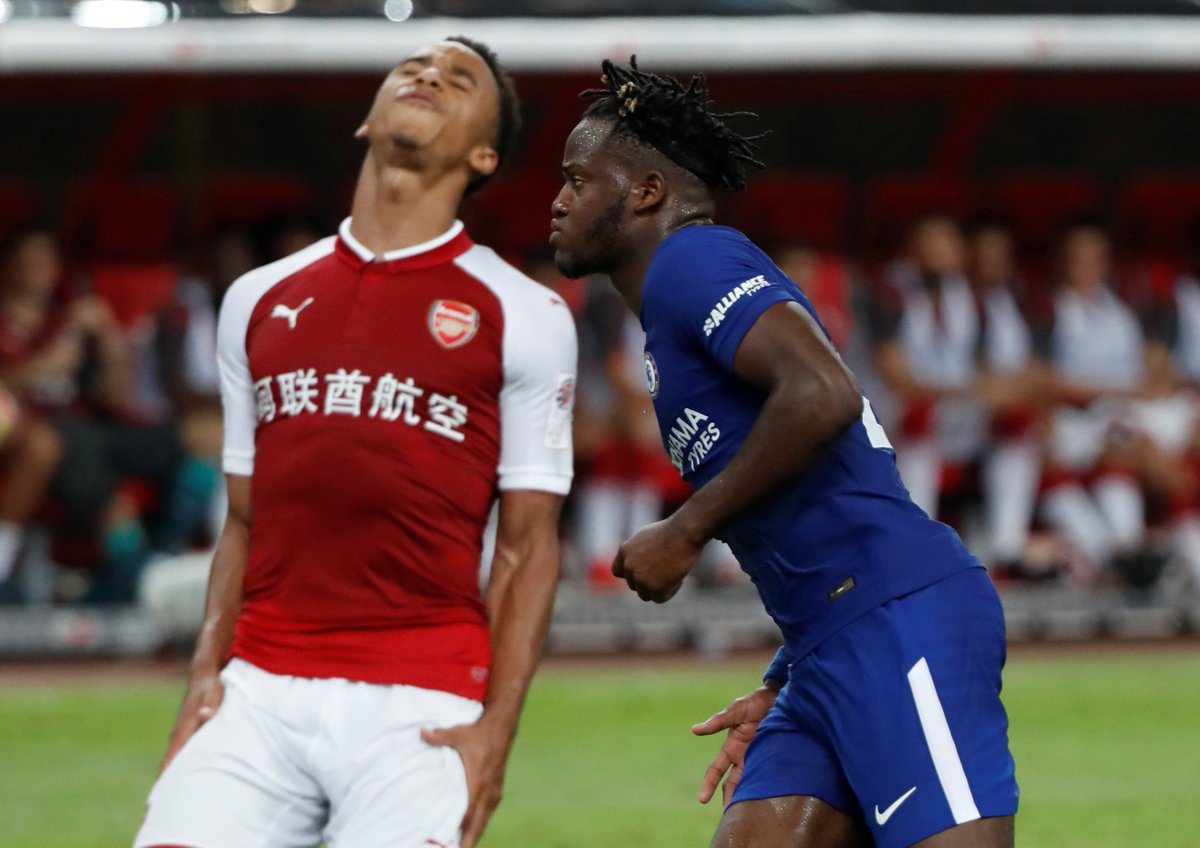 He did okay. Granit Xhaka didn’t see a great deal of possession but his one-on-one defending was pretty good. However, the Swiss midfielder seemed to be far too high up the pitch at times, leaving his defenders exposed.

Francis Coquelin did well. He appears to be back to his thumping best in the centre of the park as he stuck to what he does best: using his physicality to regain possession.

He worked very hard in the centre of the park but things didn’t quite work out for the Welshman. Aaron Ramsey had a couple of very good chances but couldn’t take either.

He didn’t see a great deal of possession.

A tough evening in Beijing for Cohen Bramall. You can see that the youngster has all the physical attributes but he’s just lacking technically. He tried a number of one-on-ones with Chelsea’s Victor Moses and seemed to lose every one.

Danny Welbeck will be disappointed with his cameo. He didn’t see much of the ball and barely threatened the Chelsea defence. 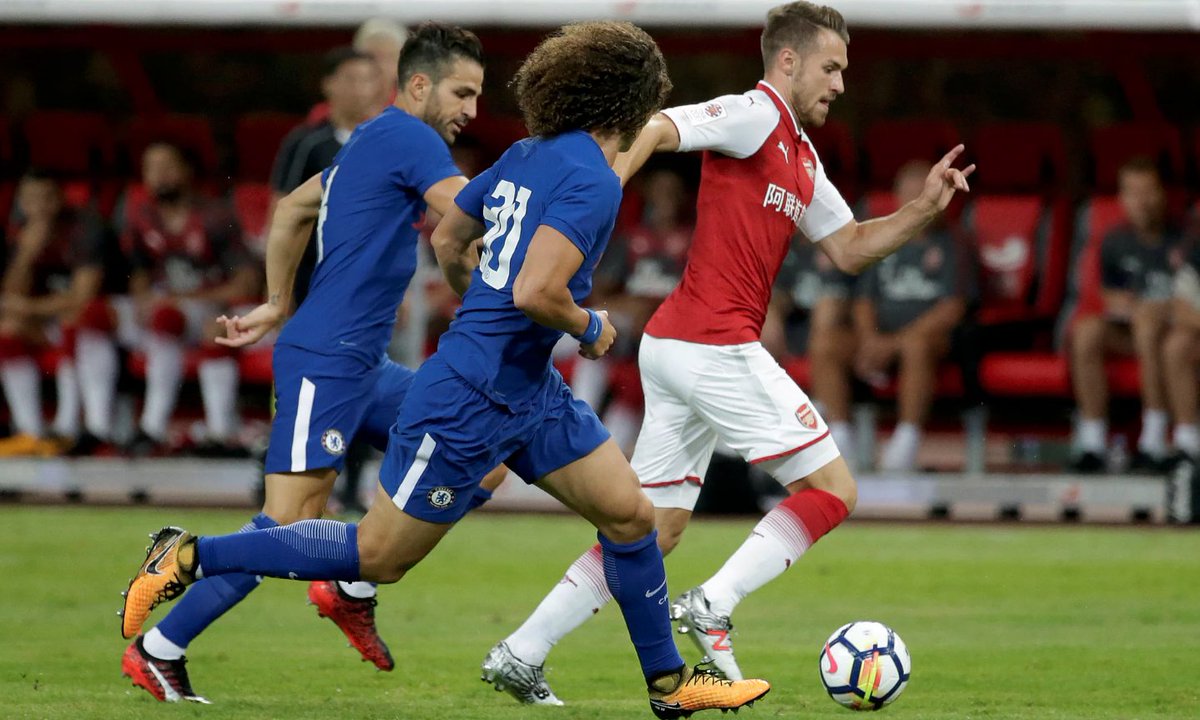 Alex Iwobi did pretty well offensively during the first-half with what little possession he received. In the second, he switched to an unfamiliar left wing-back position. His positioning was a little off and it doesn’t look likely to play there again.

He played well. Mesut Özil was Arsenal’s best player for large spells of this match. The German’s passing was generally crisp and laid a couple of opportunities on platters for his teammates which weren’t taken.

Barely involved in the play but the youngster had a nice couple of touches.

A poor performance from Alexandre Lacazette. The Frenchman’s touch was poor and he didn’t see very much of the ball at all. Subbed at half-time.

He made a difference at half-time. The Frenchman battled the Chelsea defence well and created a couple of good opportunities but unfortunately, he couldn’t take them. 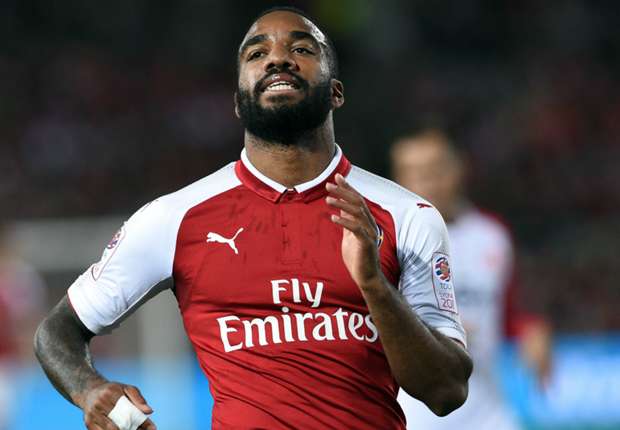