The first North London Derby of the season finished 1-1 at the Emirates Stadium. A Kevin Wimmer own goal and a Harry Kane penalty either side of half-time kept things level in a frantic match.

Spurs started the first half the better team. Pochettino surprised everyone by going with a 3-5-2 formation and it seemed to confuse Arsenal initially. The visitors controlled possession and the best chance early fell to Harry Kane who fired a low header just wide of the far post. Arsenal grew into the half and Theo Walcott came closest for the home team when he smashed the post from 20 yards out. The breakthrough came just before half time. Mesut Özil whipped a free kick into the box and defender Kevin Wimmer glanced it into his own net with Alexis Sanchez waiting behind him. 1-0 at half time.

Spurs started the second half just as well as they started the first. Arsenal could barely get the ball out of their half in early on and the equaliser came in the 50th minute. Mousa Dembele – by far Spurs’ best player on the day – broke into the Arsenal box and a lazy Laurent Koscielny challenge brought him down. Mark Clattenburg pointed to the spot and Harry Kane did the rest. The visitors nearly made it two just eight minutes later but for an excellent tackle from Nacho Monreal. The game remained open after that but neither side could create a clear chance and it finished 1-1. 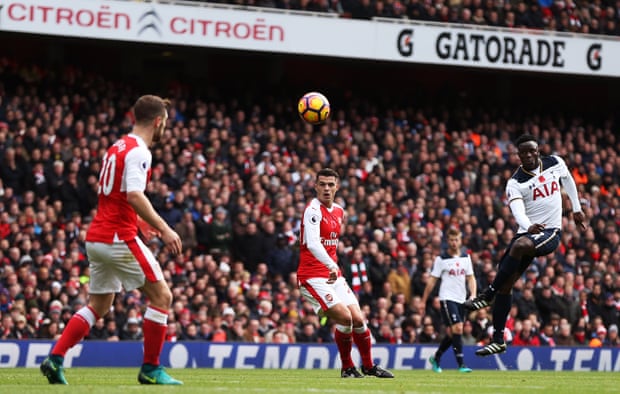 A good performance from Petr Cech who made one particularly excellent save to stop Christian Eriksen in the second half. He was there when called upon.

A solid performance from the right back. Hector Bellerin didn’t push forward as much as we’re used to but was solid defensively and made one particularly excellent tackle to stop Son Heung-Min in the second half.

A pretty poor performance from Laurent Koscielny. He only made two fouls this season prior to this game but added to his tally this afternoon. He was at fault for the penalty and brought a number of other Spurs players resulting in free kicks in dangerous areas.

He was a little shaky. Shkodran Mustafi has put in better performances for Arsenal in his short career. His heading was poor and he was caught out of position a number of times. He struggled to cope with Son Heung-Min’s pace as well.

Nacho Monreal was good in his first match back after injury. He made an excellent tackle to save a certain Harry Kane goal in the second half and performed well at the back.