Arsenal came back from a goal down to secure all three points against Southampton at the Emirates. A Petr Cech own goal in the first half was cancelled out by a Laurent Koscielny overhead kick and the match was won thanks to a late Santi Cazorla penalty.

Arsenal started the first half poorly. The visitors dominated proceedings for the first thirty minutes and took the lead in the 19th. Dusan Tadic curled a free kick from the edge of the box which Petr Cech tipped onto the bar only for the rebound to cannon off his back and into the net. It was an unfortunate goal to concede but one which the Saints deserved on the balance of the boy. The Gunners seemed to wake up around the 30th minute and were back on level terms within five minutes. Southampton failed to clear an Arsenal corner and the ball rebounded to Laurent Koscielny with his back to goal. The Frenchman had a lot to do and pulled off an exceptional overhead kick to draw the Gunners level.

The home side started the second half a little brighter. Mesut Özil grew into the match and the introductions of Olivier Giroud and Alexis Sanchez certainly picked things up. Sanchez’s driving runs and movement were certainly missed in the first half. The second 45 was dominated by Arsenal with a couple of golden chances for Shane Long on the break for Southampton. The Irishman chipped the first one wide when clean through and couldn’t generate the power to squeeze the ball home for the second. The winner didn’t seem likely and came very, very late. Olivier Giroud was bundled down in the opposition penalty area and the referee pointed to the spot. Santi Cazorla held his nerve and blasted it into the back of the net to win all three points. 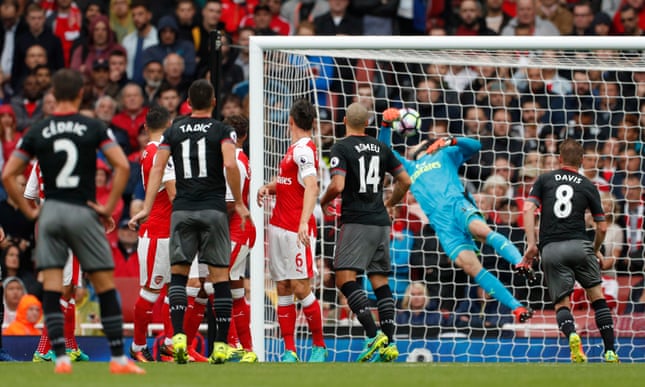 Not a terrible performance from Petr Cech, despite the own goal. It’s difficult to blame the stopper for the incident after making such an impressive save to stop Tadic from scoring. He made another late on in the second half

A good performance from Hector Bellerin. His positional sense was solid at the back and was a constant threat coming forward. The right back put in a number of dangerous crosses and very nearly found the net with a low drive in the second half.

A fairly good performance from Laurent Koscielny. The Frenchman looked a little shaky early on but grew into the match. His goal was exceptional and lead a solid defensive line for the home side.

Started the game poorly. Shkodran Mustafi looked a little overeager on his debut and gifted possession to the opposition a number of times early on. The German responded well and picked it up once Arsenal had equalised.

A fair performance from the Spaniard. Monreal didn’t quite carry the attacking threat of Hector Bellerin and made a silly foul for the free kick which led to the Southampton goal. Monreal hasn’t started the season particularly well.