Three first half goals were enough to see off Chelsea in an excellent Arsenal display. Goals from Theo Walcott, Alexis Sanchez and Mesut Ozil capped a fantastic match at the Emirates.

Arsenal were excellent from the first minute and blew the visitors away in the first half. Alexis Sanchez made is 1-0, taking advantage of a Gary Cahill error to race through and calmly chip the ball over Thibaut Courtois. It was 2-0 minutes later. The entire team seemingly combined to create a magnificent goal. Within seconds Arsenal had played their way from 35 yards out to a simple tap in for Theo Walcott. Chelsea pushed back in the following 30 minutes but The Gunners still had another gear. Mesut Ozil broke clear with the ball and combined excellently well with Alexis Sanchez. The German ran the length of the pitch before volleying the ball into the ground and over the helpless Courtois.

The second half was more about consolidation for the home side. Arsenal kept it tight and prevented the visitors from really creating any clear chances for the most part. Arsenal had chances to make it four but it remained as it was. 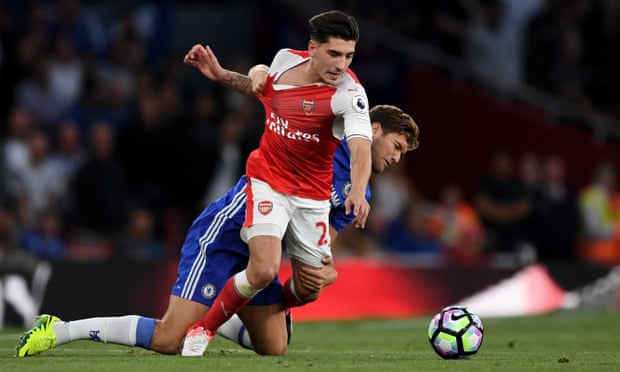 It was a fairly quiet match for Petr Cech on the whole. The keeper made a number of good catches and punches but didn’t have to deal with much in the way of shots bar that impressive late stop on Michy Batshuayi.

A wonderful display from Hector Bellerin. He was a constant option in attack, set up the second goal, and one very impressive tackle on Pedro at the other end when the winger was through on goal.

The Frenchman did extremely well to control Diego Costa in this match. The Spanish international barely had a sniff in attack. The sign of a good performance against the Chelsea man is that Costa is more wound up than the man marking him and that was certainly the case this evening.

The German put in a very good performance and formed a solid unit with Laurent Koscielny. Mustafi battled for every ball and kept Chelsea chances to a minimum.

It was a good performance from Nacho Monreal. He attacked well and was sound in defence, much better from the Spaniard.