The game was open from the off. Marc Muniesa forced a save from Petr Cech early on but then the Gunners began to grow into the match. Alexis Sanchez and Theo Walcott had chances but failed to threaten the Stoke goal. Arsenal suffered a setback before the half hour mark when Shkodran Mustafi pulled up clutching his calf. The German was replaced by Hector Bellerin with Gabriel Paulista switching to the centre. The man who is yet to experience defeat for the Gunners was certainly missed as Arsenal conceded a penalty just a few minutes later. Granit Xhaka knocked down Joe Allen in the box and Charlie Adam converted past Cech.

The Gunners looked a little flat in the minutes which followed. The build-up play was a little panicky and nervous but the home side regrouped. Arsenal strung together a fine passing move which ended in Hector Bellerin free on the right-hand side. The Spaniard found Theo Walcott who smuggled the ball in at the near post.

The Gunners started the second half much sharper and didn’t have to wait long for the breakthrough. Alex Oxlade-Chamberlain played the ball over the top of the defence and Mesut Özil had the presence of mind to lob the goalkeeper with his header. 2-1 and the Arsenal were ahead.

The home side missed chances after that but continued to threaten the Stoke goal. The visitors almost found an equaliser just after the 70th minute when Peter Crouch forced a save from Cech with his first touch since coming on as a sub.

The Gunners secured the win a few minutes later. Alexis Sanchez picked up the ball and was fouled but offloaded it to an onrushing Alex Iwobi. The Nigerian cut inside and planted the ball into the far corner to wrap up the win. The home team had a few half chances after that but the job was done. 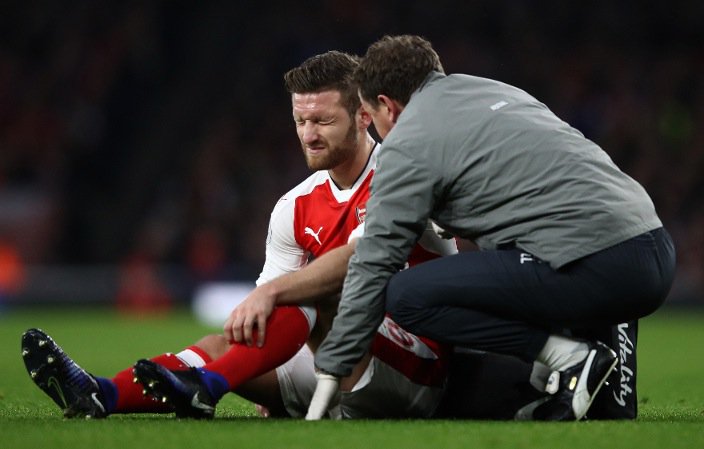 He made more saves than he probably would’ve wanted to but his performance was spot on today. Cech could do little to stop the penalty but did well to prevent Peter Crouch’s header just before the third goal which proved crucial to the Arsenal win today.

Gabriel adapted well to the change in position and put in a good performance on the whole. He was aggressive, good in possession and may be needed in the coming weeks depending on the severity of Shkodran Mustafi’s injury.

He was good this afternoon. Laurent Koscielny has been very consistent in the Premier League this season and it continued against Stoke.

The German did well until his unfortunate injury. Shkodran Mustafi was powerful in the tackle and dominating in the air.

He started slowly but how we’ve missed this man. His attacking ability on the right-hand side was so important in Arsenal’s comeback this afternoon. It was Hector Bellerin who squared the ball for Theo Walcott to make it 1-1 in the first half to cap a very good return from injury.

A solid performance from the left-back. Nacho Monreal wasn’t really tested in defence but was a good option down Arsenal’s left, particularly in the second half.