You may exercise your rights listed above by sending us an email to [email protected].

If you feel that your rights regarding data processing are violated, you have the right to lodge a complaint with your local data protection authority. Taking into account that we are Denmark based company, you may contact Danish Data Protection Agency as well: Datatilsynet, Borgergade 28, 5, DK-1300 Copenhagen K; email: [email protected]

Arsenal came back from a goal behind on two occasions to beat Aston Villa 3-2.

It was an open start to the match for both sides. Both Arsenal and Aston Villa were keen to attack from the off with sine half-chances for both sides. Nicolas Pepe threatened down the Arsenal right but it was Pierre-Emerick Aubameyang who came closest to opening the scoring for the home side.

But soon the first goal did come for the visitors. Arsenal didn’t close down the ball and a simple cross into the box evaded everyone but John McGinn who was left totally unmarked to score with ease.

Arsenal needed a response but it didn’t come. The buildup was either slow and predictable or rushed and desperate. Arsenal never looked in control of the match and the situation almost got worse when Tyrone Mings had a brilliant opportunity to put his side 2-0 up.

Arsenal’s task got a great deal tougher on the 41st minute when Ainsley Maitland-Niles was shown a second yellow card. Replays showed it was a little harsh but the end result was the same as the Gunners went into the break 1-0 down.

Arsenal started the second half very poorly. The visitors were threatening in very much the same way as they did in the first before Arsenal got the break they needed.

Matteo Guendouzi broke forward with the ball and strode into the box. The Frenchman cut onto his right side and was brought down in the area. The referee showed no hesitation in pointing to the spot and Nicolas Pepe stepped up to grab his first Arsenal goal.

It was the breakthrough Arsenal needed as the atmosphere at the Emirates was transformed. Arsenal pressed high but lost possession down the right flank. Villa broke through Jack Grealish and the Englishman strode down the left and cut it back for Wesley to restore Villa’s lead within 90 seconds of the Arsenal equaliser.

The Gunners pressed forward in search of an equaliser. Unai Emery made his substitutions but Mesut Ozil remained on the bench. On the pitch, the home side had a number of decent opportunities which went untaken.

That changed with less than ten minutes left on the clock. Matteo Guendouzi whipped a ball into the box and Calum Chambers seized upon it to toe-poke it into the top corner.

There was only one side playing after the Arsenal equaliser. The Gunners pushed hard for the winning goal and it soon came. Pierre-Emerick Aubameyang was fouled on the edge of the area and the Gabon international stepped up to score the resulting free-kick. It was a fine strike from the forward.

Arsenal saw the game out after that to pick up the crucial win.

He’s been better. Bernd Leno perhaps could’ve done a little better with the second Villa goal in particular and didn’t make any saves of note.

He wasn’t playing well long before he got that red card. Ainsley Maitland-Niles was slow to get out and defend and offered very little moving forward. It was a really poor performance which culminated in that dismissal which really hurt the side.

He was so poor. David Luiz put in another calamitous performance at the back and will attract much of the blame particularly for the second Villa goal. 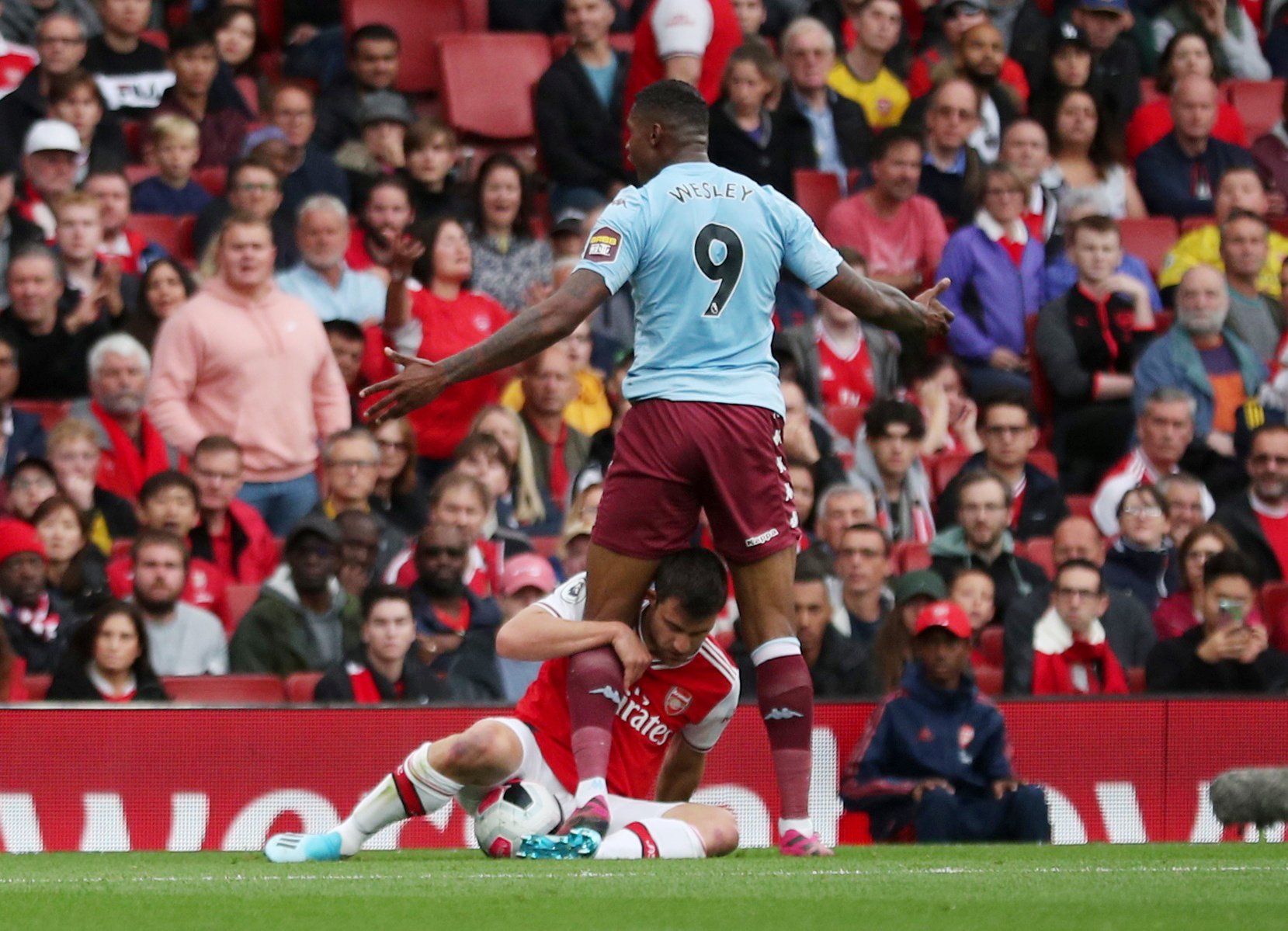 He was better than his defensive partner but only just. Sokratis put in a poor performance with some woeful moments defensively.

He was slow to close down defensively and wasteful in attack. Sead Kolasinac had a poor afternoon.

He did not play well. Granit Xhaka was non-existent in the midfield and honestly looked scared of receiving the ball. The Swiss midfielder pushed further forward and was anonymous. He was close to being sent off on a number of occasions and stayed on the pitch a lot longer than he had any right to.

He did pretty well after coming on. 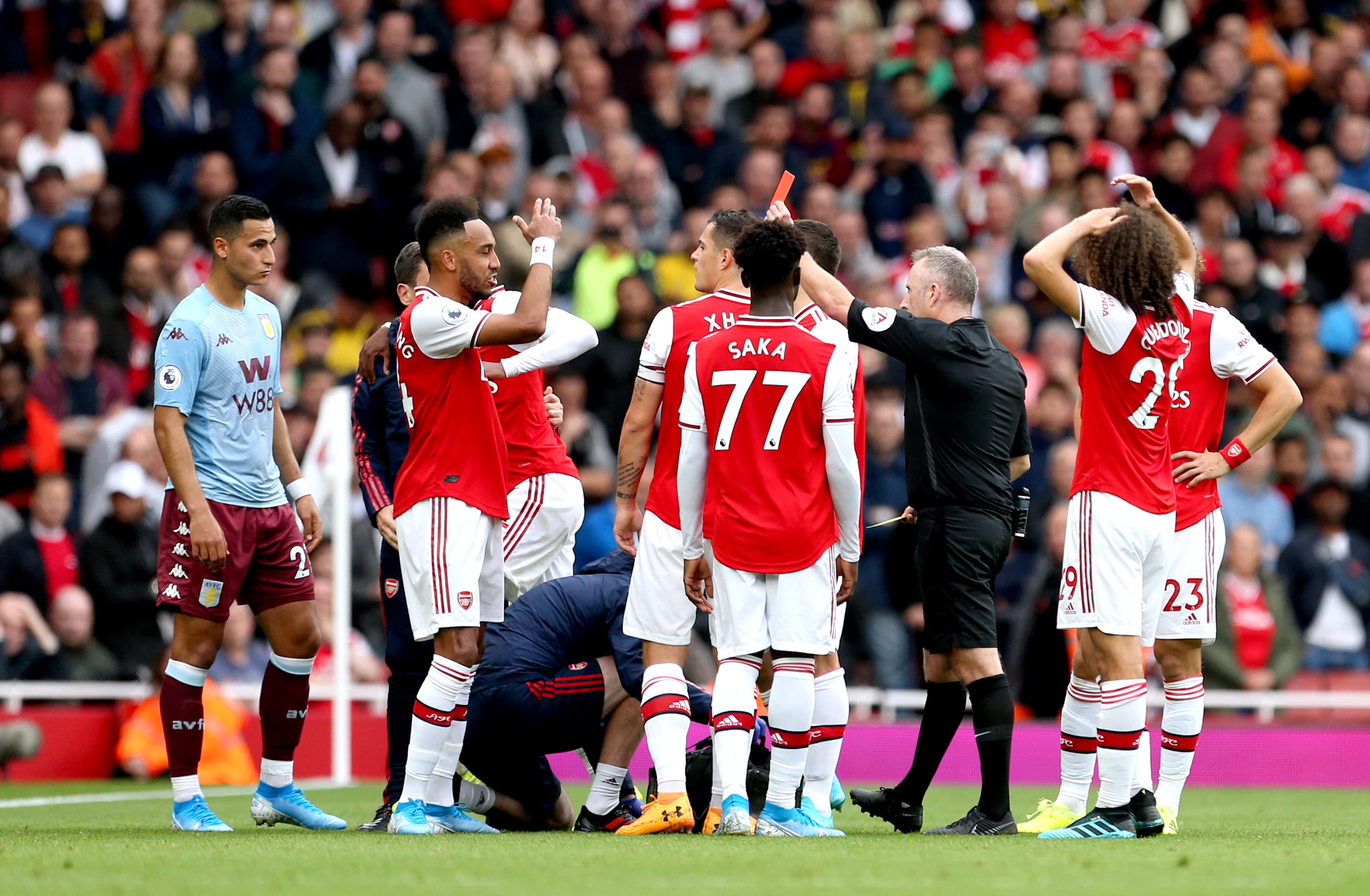 He was really poor in the first half so the rating reflects just how good he was after the break. Matteo Guendouzi was the biggest driving force in the Arsenal side after the break both in possession and without it. He won the penalty and chipped the ball in for Chambers’ equaliser. A real standout performance.

He struggled at times this afternoon. Dani Ceballos couldn’t find the ball in the right positions and failed to make an impact on the match.

Joe Willock made an impact after coming off the bench.

He was Arsenal’s best player in the first half but did dip after the break. It was great to see Nicolas Pepe get his first Arsenal goal and he was a threat throughout. Let’s hope he kicks on from this performance and improves.

He was pretty poor for much of this match but again, Pierre-Emerick Aubameyang made the difference. his free-kick was a wonderful strike at a crucial moment. 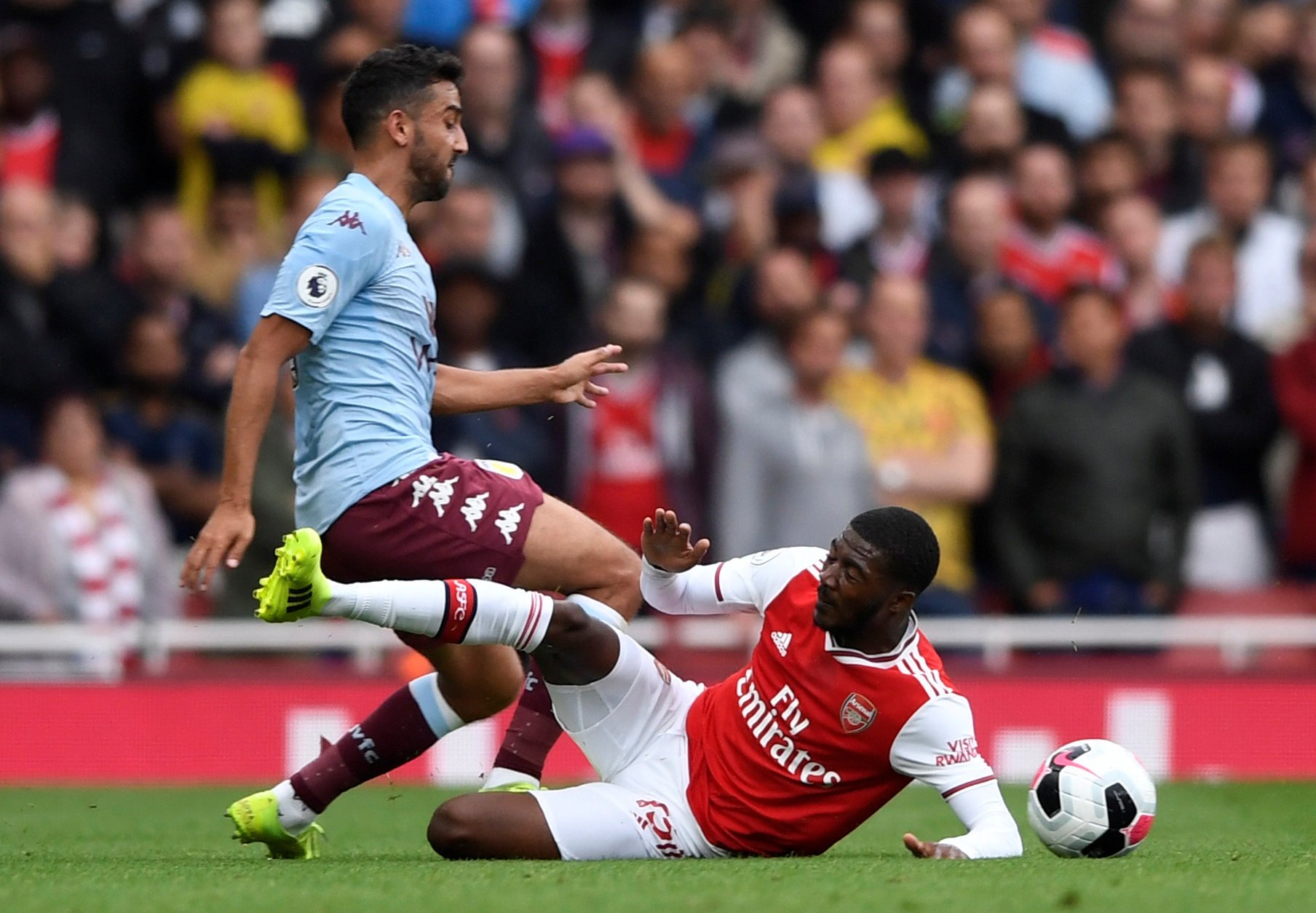 Bukayo Saka had his moments in the first half. He looked a little flat-footed at times and didn’t play with the same level of confidence as he did in the previous match but was still one of Arsenal’s best players in the opening 45.

It was a bit of a mixed bag from Calum Chambers. He grabbed the all-important equalising goal but was at fault for Aston Villa’s equaliser. Still, he represented a major improvement on Ainsley Maitland-Niles at right-back.

He made a number of wrong calls today. The first-half was embarrassingly dull and the second-half substitutions took far too long to come on.