The game started slowly. The Leicester City defence dropped deep but the Gunners struggled to break down Craig Shakespeare’s side. There was little in the way of chances for the first 30 minutes barring a few efforts from range and despite the home side’s pressure, Leicester had the best early chance. A long throw from Christian Fuchs fell all the way to Riyad Mahrez whose powerful half-volley was stopped brilliantly by Petr Cech.

Arsenal responded with an opening of their own. A nice piece of work from Theo Walcott and the Englishman fashioned an opening but Kasper Schmeichel saved well at his near post. Alexis Sanchez had a woeful first-half but produced the moment of the half. A quick bit of play and the Chilean produced a belting shot which clipped Leicester City’s crossbar and went behind.

Arsenal started the second half poorly and couldn’t fashion much in the way of goalscoring chances. The final ball was lacking and on the rare occasions it did come, there was nobody on the end of it.

Arsene Wenger switched back to a 4-2-3-1 just after the hour mark and it really opened the game up. The visitors fashioned a couple of openings but it was Arsenal who took the lead late on. When it looked to be heading towards a draw, the ball rebounded to Nacho Monreal out wide. The full-back took a stinging cross-shot which was heading well wide but for an unfortunate deflection from Robert Huth. It flicked off the Leicester man and past Kasper Schmeichel in goal and that was all that separated the teams at the Emirates. 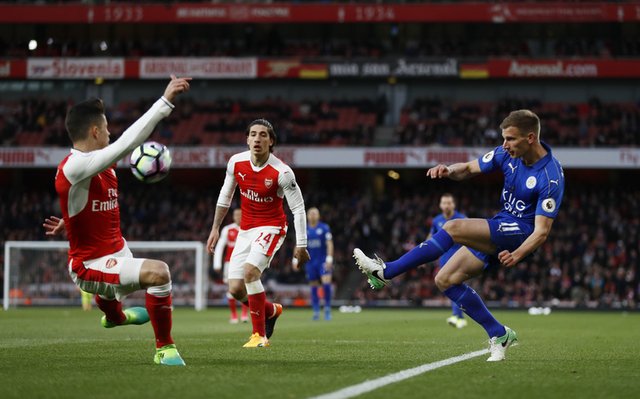 He made one excellent save in the first-half to deny Riyad Mahrez. Petr Cech was fairly quiet aside from that but almost gifted Leicester a goal with a wayward pass before the break.

He wasn’t quite as effective as he was against Manchester City. Gabriel Paulista still put in a decent performance but was caught flat-footed a couple of times during some one-on-one moments.

He was decent enough. Laurent Koscielny was solid in the back three and helped keep Leicester’s forward line quiet.

He was the standout player in the back three. Nacho Monreal played in his third different position in four weeks but brought identical levels of commitment and skill. The Spaniard was surprisingly dominant in the air as well and it was his shot which deflected off Robert Huth for the goal.