A three-minute double helped Arsenal get all three points at the Emirates against Jose Mourinho’s Manchester United. Granit Xhaka and Danny Welbeck got the all-important goals to help keep Arsenal’s top-four ambitions alive.

The game started brightly. Both sides saw a lot of the ball and made the goalkeepers work early on. Petr Cech stopped a couple but David De Gea stopped the best effort of the early exchanges. Alexis Sanchez found Aaron Ramsey with an excellent pass but the Welshman’s low drive was excellently stopped by De Gea.

The first-half drew to a close and there were very few complaints from anyone in the Emirates. It was a dull affair for the most part and the second-half didn’t start much better. That quickly changed.

Granit Xhaka picked up the ball in the centre of midfield and took a few strides forward before unleashing a shot. His effort took a wicked deflection off Ander Herrera and the ball looped up into the air and over David De Gea. It was the sort of breakthrough which the Gunners – and the game – needed.

The pitch opened up and the United players looked rocked. The Gunners piled the pressure on and soon took advantage. Alex Oxlade-Chamberlain broke free down the right and put in an excellent cross for Danny Welbeck to attack. The Englishman didn’t need a second invitation and controlled the header past David De Gea in goal for his former club.

The Gunners shut up shop after getting their goals and saw out the match as Arsene Wenger finally got a Premier League win over Jose Mourinho. 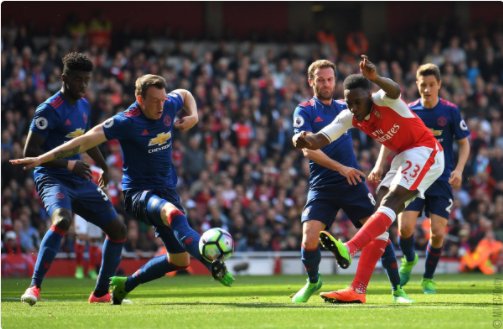 Petr Cech performed well. He stopped everything which he should’ve and was domineering in the air. Good on the ball as well to cap a solid performance.

He was a little shakier than usual. Rob Holding looked to be the target of some early Man Utd pressure and maybe that got the best of him. He very nearly gifted Wayne Rooney a goal in the first-half. Holding recovered well but he’s played better.

Laurent Koscielny was very good for the most part. The Frenchman played a slightly more aggressive defensive game and helped the Gunners win the ball high up the pitch on a number of occasions.

Nacho Monreal was solid at centre-back once again. The Spaniard is just so consistent in any position across the defence.