A Mesut Özil volley proved to be the winner in a nervous match at the Emirates. Two first-half goals from Theo Walcott put the Gunners 2-0 up but Granit Xhaka’s red card made things nervy in the second. The Gunners held on to the result to go joint-top of the league.

Arsenal started the first half brightly. The pressing was high and the Gunners were solid in possession. The best chance in the opening exchanges came to the home side when Shkodran Mustafi saw his header cannon off the crossbar. Swansea couldn’t keep the ball and the deadlock was broken just before the half-hour mark. Alexis Sanchez chipped it over the top for Hector Bellerin to squared his header. Jordi Amat couldn’t clear his lines and Theo Walcott pounced to make it 1-0.

The Englishman made it two just five minutes later. Arsenal swung in a corner that was awfully defended by the visitors. The ball fell to Walcott who turned and squeezed his shot past Lukasz Fabianski. It seemed a case of how many Arsenal could get at the point but Swansea weren’t done. Granit Xhaka was caught in possession on the edge of his own box and Gylfi Sigurdsson made is 2-1, curling an effort past a helpless Petr Cech. A marvellous goal but one of Arsenal’s own doing.

The second half started well for the Arsenal. Theo Walcott should’ve made it 3-1 but hit his shot straight at Fabianski with the goal at his mercy. The Gunners did make it three a few minutes later. Alexis Sanchez lofted in the cross for Mesut Özil to smash home a volley from inside the area. A lovely goal for the birthday boy.

And that should have been that for the home side but things weren’t quite that simple. Swansea got back into the match just 10 minutes later when Moudou Barrow skipped past Monreal and found an unmarked Borja Baston in the penalty area. The Spaniard got his first in England and the game changed again just a few minutes later. Barrow again evaded a challenge and was brought down by Granit Xhaka on the halfway line. A cynical, professional foul from the Swiss international and when everyone was expecting the referee to pull out a yellow card, he produced a red.

Arsenal had to shut down the game after that. Swansea missed a couple of chances but couldn’t work Petr Cech. Theo Walcott missed a sitter in the final few minutes but Arsenal had done enough for the three points. 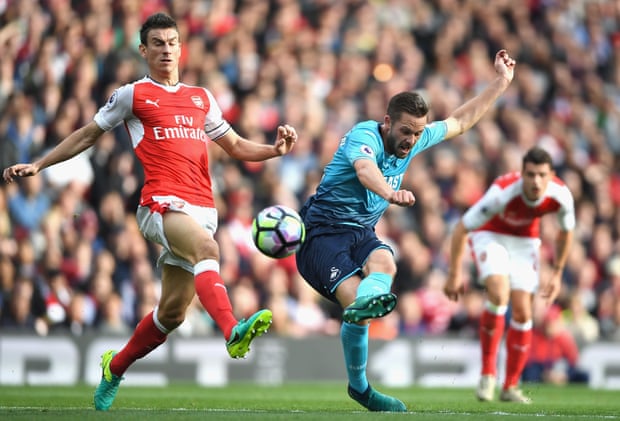 It was quite a quiet match for Cech but he was far from convincing in possession. He misplaced a number of clearances and was perhaps a little out of position for the first goal. He did well to hold on to a few late efforts from the visitors.

Another excellent performance from Hector Bellerin. This guy is special, solid defensively and a constant threat going forward. He did well to set up Theo Walcott for the opening goal too.

A good performance from Laurent Koscielny. The centre-back put in a good shift and barely put a foot wrong without being overly tested for the most part.

Mustafi played well alongside Koscielny. He covered the space well and came very close to his first Arsenal goal with a header from a corner.

A shaky performance from Nacho Monreal. Moudou Barrow gave him a tough match and seemed to have the beating of the Arsenal man, especially in the last 30 minutes.