Goals from Dele Alli and a Harry Kane penalty saw off Arsenal in the final North London Derby at White Hart Lane.

The final North London Derby at White Hart Lane was always going to be a huge one but this match was even bigger. With both sides chasing Champions League football and Spurs with an outside shot of the title, the game took on even more significance.

The occasion seemed to get to the visitors more with Spurs taking the initiative. Harry Kane tested Petr Cech’s reaction early on before the home side missed a couple of seemingly simple chances. First Dele Alli headed wide from six yards before Christian Eriksen volleyed one over the bar from the same distance.

The Gunners grew into the match and started crafting chances of their own. Kieran Gibbs almost got on the end of a 1-on-1 before Arsenal’s most impressive player in the first 45, Aaron Ramsey, forced a solid save from Hugo Lloris.

Spurs picked it up in the second half and secured the win with two goals in the space of five minutes to secure all three points at White Hary Lane. 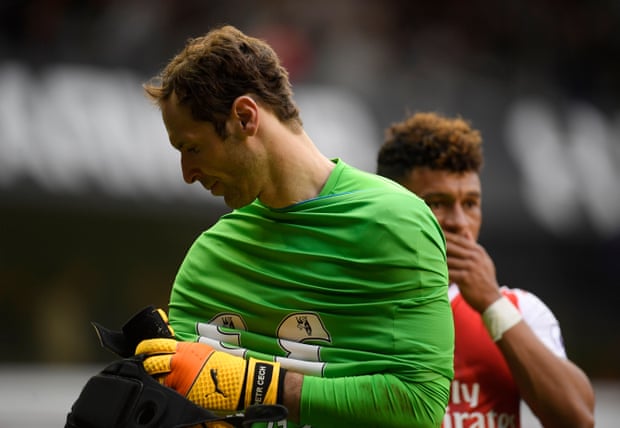 He started poorly but grew into the match. Petr Cech’s kicking was a major cause for concern early on but he produced a string of excellent saves to keep the scoreline respectable.

Gabriel Paulista had a poor match. The Brazilian has looked mightily impressive in this role before this afternoon’s match but couldn’t keep it going. He conceded a penalty and was easily out-strengthed by Dele Alli for the first Spurs goal.

He was okay. Laurent Koscielny helped keep Harry Kane and Dele Allie quiet for the majority of the match but will be disappointed with this afternoon’s result.

The Spaniard did alright. Nacho Monreal played in the centre of defence again this afternoon and didn’t do that much wrong.