Arsenal beat Bate Borisov 4-2 in their first away match in the Europa League thanks to goals from Rob Holding, Olivier Giroud and a Theo Walcott double.

It was an unusual time to play a football match for Arsenal at 6pm on a Thursday UK time but that didn’t seem to hinder the Gunners. One thing which became clear early on was that Jack Wilshere would be controlling this football match.

Wilshere and Reiss Nelson linked up well with Theo Walcott within the opening six minutes. Wilshere played the winger in but unfortunately, Walcott could only find the post. The Englishman made no mistake on his second chance. Wilshere was again involved, skipping past the Bate defence before crossing along the six yard box. Walcott was unmarked to convert a rare headed goal.

Wilshere himself had one in the net a few minutes later but Walcott was offside in the buildup. It was a sign of things to come for Bate Borisov. Denis Scherbitskiy was in goals for the home side and made a colossal error. The keeper received the ball and gave it straight to Theo Walcott when he was trying to play it out from the back. Walcott took a couple of touches and just slid it past him to make it two.

Jack Wilshere was pulling the strings in midfield and almost set up another with a wonderful inside pass to Ainsley Maitand-Niles out wide. His shot was saved but it led to the corner which got Arsenal’s third corner. Some rebounds in the box resulted in Rob Holding getting his first Gunners goal.

It looked like both side were content to call it a day. Arsenal 3-0 up after 26 minutes but that wouldn’t last. Bate pushed forward in a rare attack down the flank. The cross came in from their right wing and Mirko Ivanić was on hand to score a wonderful header.

The home side came back into the game slightly in the aftermath of that goal but the Gunners kept making chances. Rob Holding came close to adding another goal late on but hit the post with a half-volley from a corner.

The second-half began just as the first finished and Arsenal didn’t have to wait long for another chance. If the second goal was a gift from the goalkeeper then the fourth was a present from the referee who pointed to the spot for a seemingly innocuous challenge. Olivier Giroud stepped up to convert and grab his 100th Arsenal goal.

In typical Arsenal style, they didn’t make it easy for themselves and let Bate back into the match. A couple of defensive errors gave the home side a couple of openings to make the game interesting. Ospina saved one chance but the ball fell straight to Mikhail Gordeichuk who was unmarked and on-hand to make it 4-2.

This led to a nervy last twenty minutes for Arsenal in a match they should have just let tick away. The Gunners were too open which allowed Bate to push forward  but fortunately, they couldn’t do much more.

David Ospina couldn’t do much more about Bate’s goals but made a couple of good stops.

He made a couple of errors but Bate didn’t press forward enough to really threaten the Arsenal backline. Shkodran Mustafi looked exposed on that right flank and let attackers skip past him after diving in too early. 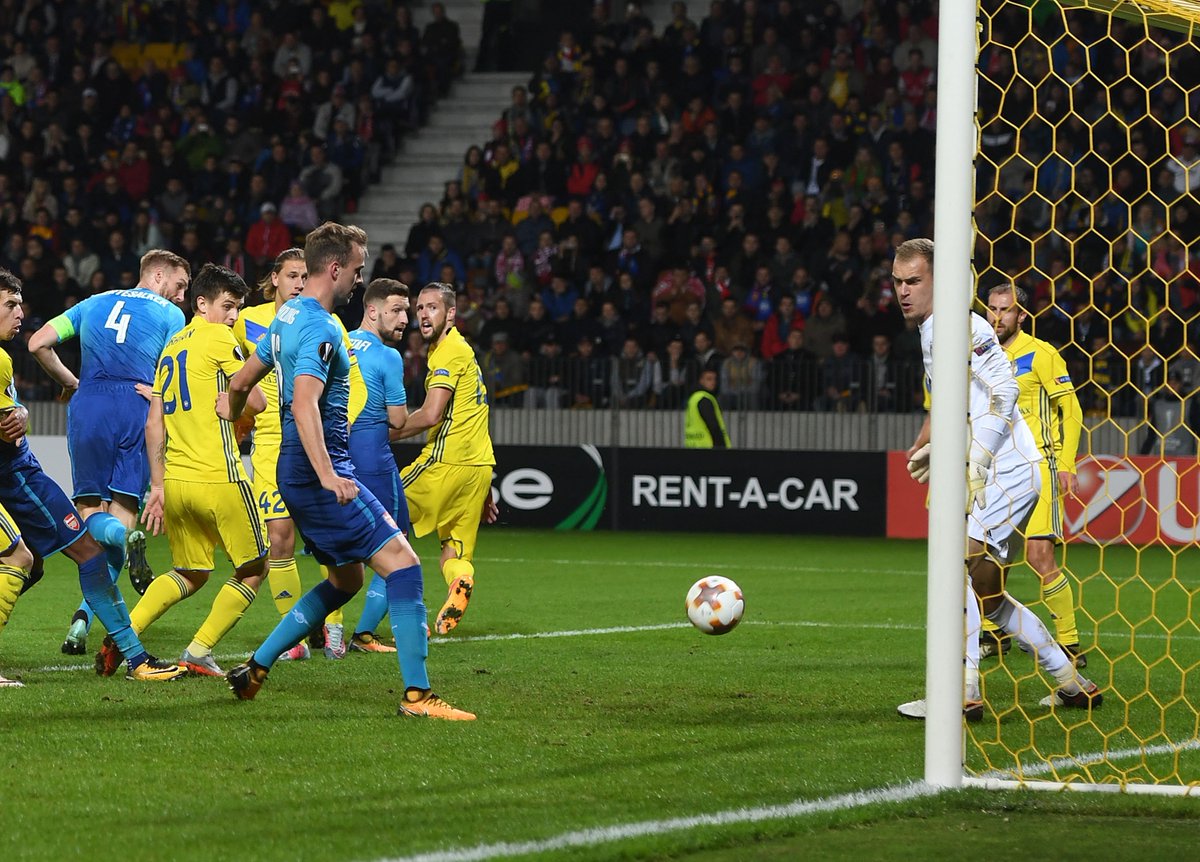 Per Mertesacker didn’t have a great deal to do in the first-half but looked a little fragile at times in the second. The German should’ve done better for the second Bate goal but he was covering for Mustafi’s mistake.

Rob Holding probably had more touches in Bate’s penalty area than his own. He didn’t have much to do at the back but was a menace from set pieces offensively. It was great to see the youngster get his first Arsenal goal.

Reiss Nelson impressed. He was calm and composed on the ball and popped up in a variety of positions. Arsenal haven’t utilised their full-backs as often in recent weeks which gave Nelson a quieter afternoon.

Kept it steady on the right flank. Did well. 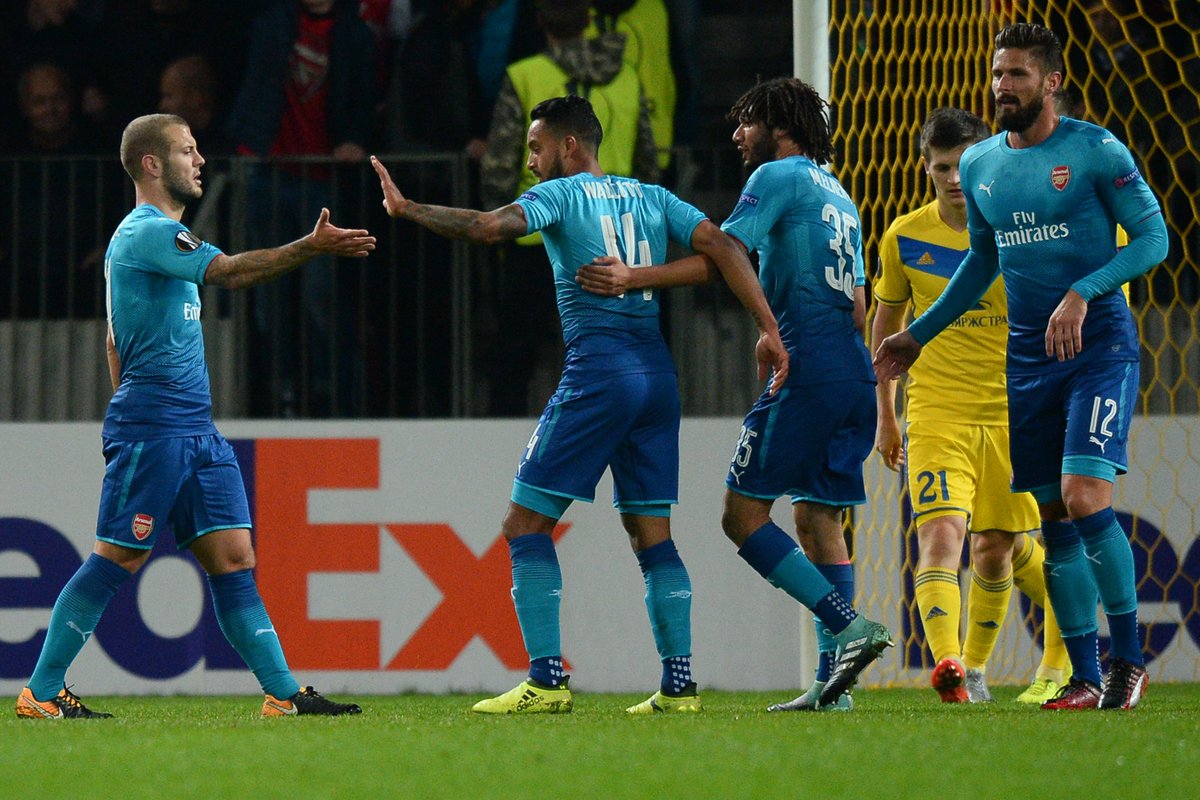 He played well. Chris Willock was making his full debut for the Gunners but looked extremely comfortable in the centre of midfield.

Mohamed Elneny put in another solid performance. He’s been very consistent so far this season, offering a lot both defensively and moving forward. 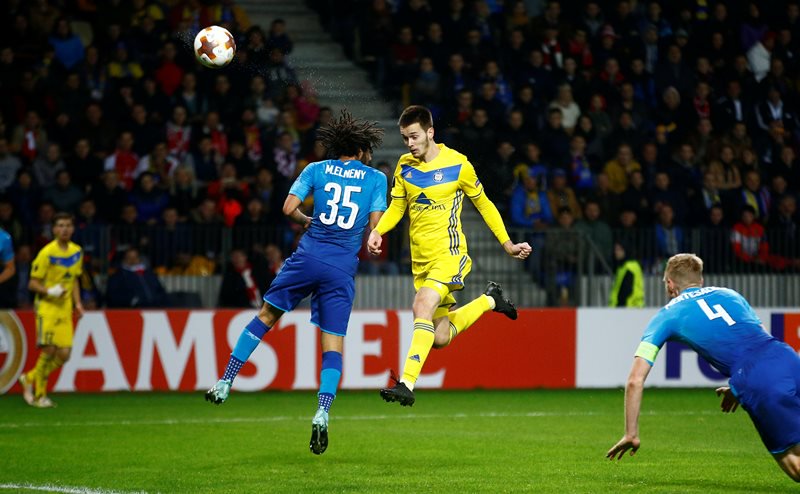 He played well. Left wing-back isn’t Ainsley Maitland-Niles’ best position but he appeared more comfortable this evening. He didn’t have a great deal to do defensively but was a threat moving forward at times.

A very good performance from Theo Walcott. The Englishman seems to be adapting to this formation and played more as a striker than a right-winger. He got two goals and could have even more.

Great stuff from Jack Wilshere. The Englishman controlled the match at times and showed tremendous quality, particularly in the first-half. He was tremendously composed in possession and showed a great attacking threat with his bursts from midfield.

He played well. Olivier Giroud will remember this as the match he got his 100th goal for Arsenal, the 19th player to reach that tally. The Frenchman put in a good shift. His link-up play was great and he held up the ball well.