A controversial late goal from Laurent Koscielny was enough to see off Burnley in a nail-biting match at Turf Moor. Arsenal dominated the match but had to wait until stoppage time to find the breakthrough.

The first half was a frustrating one for Arsenal. The Gunners had a lot of the ball but couldn’t break down a stubborn Burnley defence. The buildup play was slow, far slower than it has been in the recent matches. Arsenal didn’t create much in the way of clear chances and seemed to be let down by the final ball. The best chance of the half fell to Burnley as Sam Vokes headed wide from seven yards out when everyone seemed to think he was offside.

Arsenal started the second period a little better and made more in the opening ten minutes than in the first 45. Alexis Sanchez and Mesut Ozil both forced Burnley into last-ditch saves. Arsenal continued to press and came close when Alexis Sanchez fired a volley against the foot of the post. Burnley hit the woodwork at the other just minutes later when Michael Keane smashed in a header from a corner. The Gunners created another few chances in the remaining 30 minutes with Theo Walcott coming the closest until the very last seconds. It was Walcott who nodded the ball down to Alex Oxlade-Chamberlain whose shot seemed to cannon off Laurent Koscielny’s raised hands and into the back of the Burnley goal. We’ll take it. 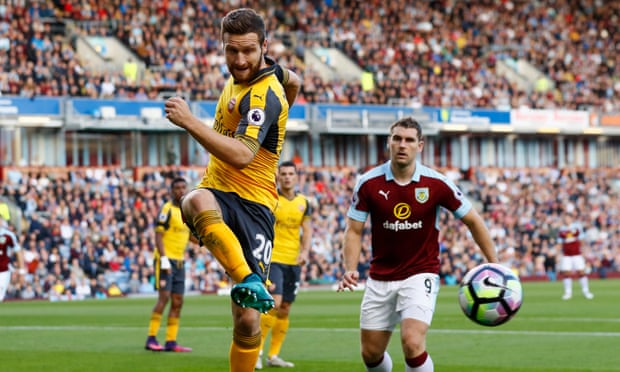 A fairly quiet match from Petr Cech but the goalkeeper saved everything expected of him. The main problem with his performance was the Czech stoppers’ relatively poor distribution.

He had a good match. Bellerin was good in possession and provided a constant option down the right. The Spaniard’s final ball could have done with some work but he wasn’t alone in that regard.

Laurent Koscielny was quietly effective today. The Frenchman was tidy in possession but didn’t play as big a role as his defensive partner until the last few seconds. It’s probably the only goal Laurent Koscielny will punch in this season but he won’t care.

A big performance from Shkodran Mustafi. The German was up against Sam Vokes for the majority of the game in a very physical contest and Mustafi came out on top for the most part.

Very little got past Nacho Monreal in defence today. The Spaniard was a constant option on the wing but much like Bellerin on the other side, couldn’t find the killer ball.