Arsenal made it nine consecutive wins under Unai Emery as they beat Fulham 5-1 at Craven Cottage.

It was an open start to this early Premier League kickoff. Bernd Leno was forced into an early save before the Gunners found some promising opportunities down the other end. Alex Iwobi, Danny Welbeck and Nacho Monreal all found space in good areas but failed to find that key pass.

The Gunners continue to press forward and were finding a considerable amount of success down the left flank and that’s where the opening goal came from. Iwobi burst clear and played the ball off to the overlapping Nacho Monreal. The Spaniard cut the ball back for Alexandre Lacazette with his back to goal who turned before finding the bottom corner.

Arsenal pressed on and very nearly made it 2-0 moments later. It was Welbeck’s turn to cross from the left and he found Henrikh Mkhitaryan whose shot was brilliantly saved by the goalkeeper.

Arsenal looked in control of the match but it wouldn’t last. Just five minutes before half-time, Nacho Monreal’s stretched clearance failed to beat the defender as the home side burst clear with the ball. Arsenal’s backline was stretched and Andre Schurrle found space behind the defence. He was found by Vietto and the former German international made it 1-1.

The second half started with the Gunners in the ascendancy. Marcus Bettinelli made a fine save to deny Hector Bellerin from the edge of the error but the Fulham goalkeeper could do very little to keep the next effort which came his way.

The third goal of the match came from nothing. The Gunners stole the ball back from a Fulham throw and fed it into Alexandre Lacazette’s feet with his back to goal again. The ball span around the Frenchman and he struck a fine half-volley from the edge of the error which found a way past Bettinelli.

Fulham crept back into the match and Unai Emery was forced into some substitutions. Aaron Ramsey was one of them and the Welshman didn’t take long to score. In a move which started at one end of the pitch, Arsenal passed, flicked and shifted through the team in a fantastic array of passing. It was Pierre-Emerick Aubameyang who was free down the left and he cut it back for Ramsey whose inventive flicked finish found the bottom corner and made the points safe.

The Gunners edged clear of their opponents in the final twenty minutes. Hector Bellerin found an acre of space down the right and cut it back to Pierre-Emerick Aubameyang. The Gabon international turned before volleying it into the far corner.

There was only one team taking part in the final 10 minutes as the Gunners attempted to add more. They did just that when Aubameyang burst clear in added time to grab his second and make it 5-1.

A solid performance from Bernd Leno. His distribution was fine and the German produced a number of solid saves to keep Arsenal in the game.

He was okay. Hector Bellerin didn’t have a great deal to do moving forward and was tested defensively. He started poorly but grew into this one, grabbing a decent assist for Aubameyang’s goal.

Shkodran Mustafi was generally solid at the back but did make a couple of errors. It was the former Germany international who lost Andre Schurrle for the Fulham equaliser. 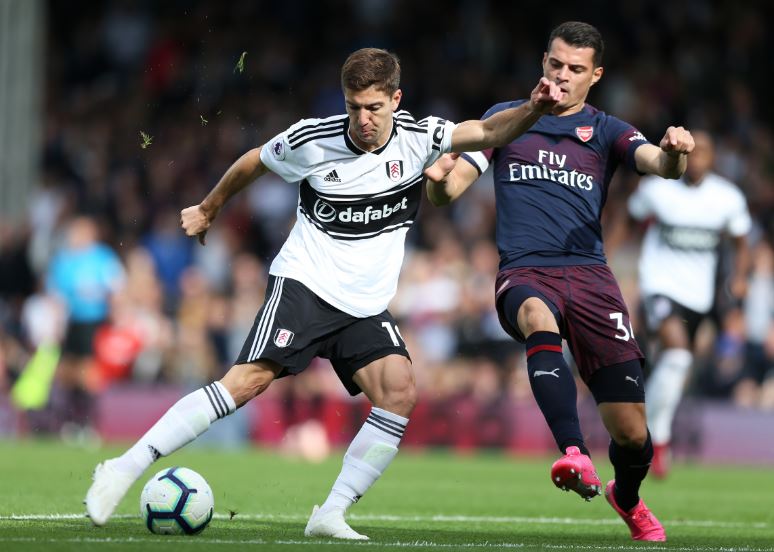 Another impressive performance from Rob Holding. The Englishman was solid on the ball and excellent defensively, keeping Aleksandar Mitrovic quiet throughout most of the match.

Nacho Monreal was a threat moving forward but made a mistake in the run-up to the Fulham equaliser. The Spaniard was solid enough at the back but his best work was moving forward.

An excellent performance from Lucas Torreira. The Uruguayan international put in the kind of match which Arsenal fans were expecting from him in the centre of midfield.

Granit Xhaka also put in a fine performance. The Swiss international provided an excellent screen for his defenders and showcased a fine range of passing to start the Gunners moving forward. He’s creating a good partnership with Torreira.

A fine performance from Alex Iwobi. The Nigerian international was a constant threat down the Arsenal left, especially in the first half and had a hand in the opening goal. A very impressive outing.

Talk about an immediate impact. Aaron Ramsey needed less than a minute to score a truly memorable Arsenal goal. He played extremely well.

He played well. Henrikh Mkhitaryan didn’t grab the headlines but put in a decent performance. He found space and moved the ball well.

A decent outing for Danny Welbeck. He stretched the Fulham backline well in the first half and grabbed an assist for Alexandre Lacazette’s second goal.

He must have enjoyed his brief cameo. Pierre-Emerick Aubameyang came on just as the Gunners edged away from their opponents.

A brilliant performance from Alexandre Lacazette. The Frenchman was on fire this afternoon, grabbing two goals and working extremely hard for his team. We’re seeing the best of Lacazette right now.

A quiet one. Matteo Guendouzi didn’t see much of the ball.