Arsenal had to settle for fifth place in the Premier League and Europa League football despite beating Everton 3-1 at the Emirates Stadium.

The game got off to a quite unbelievable start. Arsenal started sharply and found themselves in front within eight minutes. Mesut Özil reached the byline and cut the ball across for Danny Welbeck. The Englishman had the goal at his mercy but, bafflingly, fluffed the chance. Fortunately, it fell for Hector Bellerin to slot it home and make it 1-0.

The Gunners were cruising but one moment of madness changed that. Enner Valencia burst down the right for Everton and Laurent Koscielny came across to deal with the threat. The Frenchman slid in with speed and completely missed the ball. The referee reached for his back pocket and showed Laurent Koscielny a straight red card for the challenge.

Nerves started to appear at the Emirates but Everton couldn’t capitalise. Instead, the Gunners lifted things up a gear. With 26 minutes played, Alexis Sanchez drove forward and took a shot from range. It rebounded to Danny Welbeck and time seemed to stop as the Englishman took a few touches in the box and brought goalkeeper Joel Robles out of his goal. Welbeck simply slid a square ball for Alexis Sanchez to pass into an empty net.

After the second goal, Everton got back into the game and created a number of clear openings and while they couldn’t find a way back into the match, the atmosphere at the Emirates did drop upon hearing the news from Anfield.

Liverpool led Middlesbrough comfortably by the time their Merseyside neighbours got back into the match at the Emirates. After Gabriel Paulista had been injured and brought off, Everton got back into the match. A simple cross into the box and Nacho Monreal accidentally handled the ball. The referee pointed straight to the spot and Romelu Lukaku stepped up to make it 2-1.

Aaron Ramsey added some gloss to the victory in injury time courtesy of a wonderful goal. The Welshman picked up the ball and swivelled in the box before curling the ball into the far top corner. Arsenal’s last goal of the league season was one of their best in 2016/17.

The Czech stopper played very well this afternoon. Petr Cech was equal to everything asked of him in the first-half especially as he got behind every shot Everton hit his way.

He did okay. Arsenal switched to a back four after the Laurent Koscielny sending off and he looked slightly less comfortable. Rob Holding didn’t look quite as comfortable in a four as he has done in a back five but it was still a decent performance.

It was good to see him start but what a stupid challenge from Laurent Koscielny in the sending off.

He played very well and it was a huge shame to see him come off injured. Gabriel Paulista was hugely disappointed with the injury after a quite commanding performance in the absence of Laurent Koscielny. 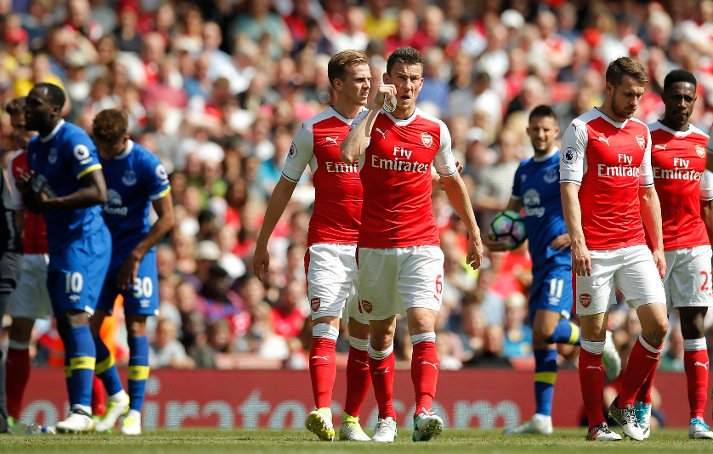 He did very well considering it was the German’s first match all season. It was good to see Per Mertesacker back out there.

He started the match well and was one of Arsenal’s biggest attacking threats before the sending off. Still, it was good to see Hector Bellerin getting his name on the scoresheet. 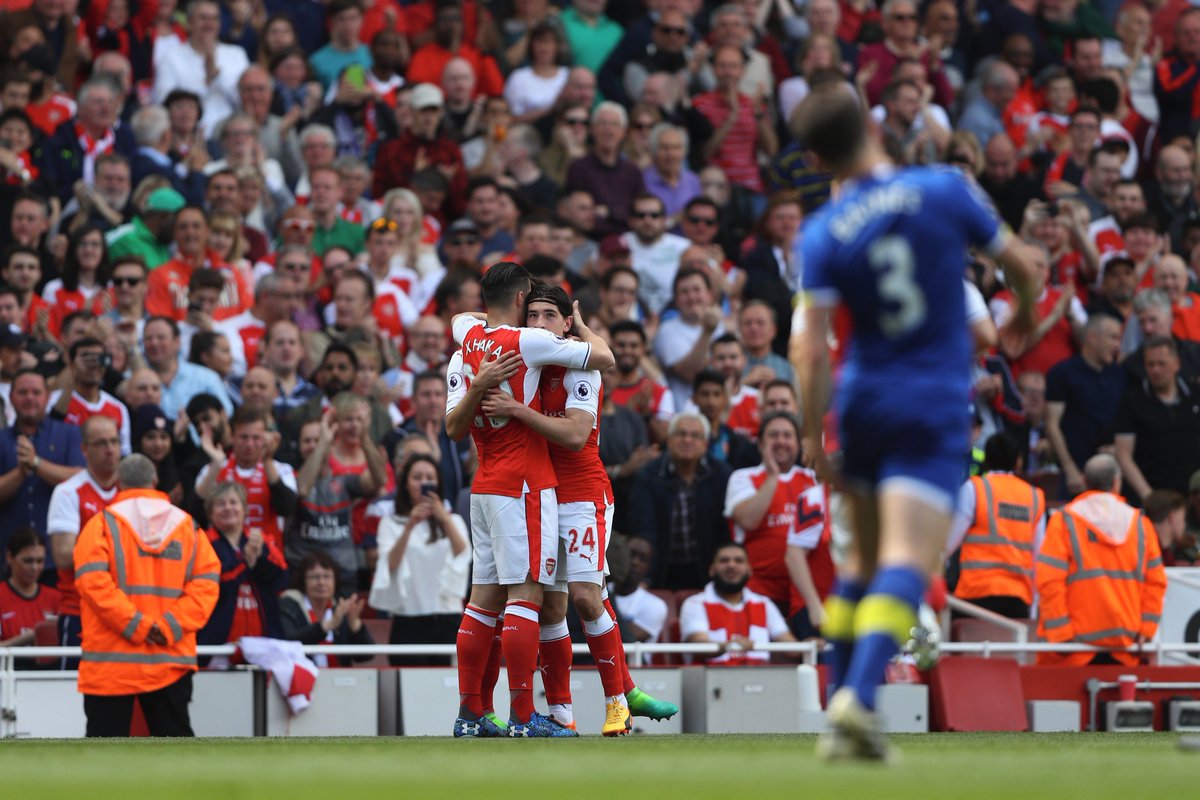 He did well. Granit Xhaka controlled the midfield well at times and showed off his full range of passing.

Francis Coquelin did okay during his cameo.

He’s had more involved matches. Aaron Ramsey was pretty quiet out there in the centre of the park and spent much of the game focusing on his defensive duties after the sending off. Things did pick up for the Welshman as the game progressed and it was great to see Ramsey get on the scoresheet late on.

Nacho Monreal has played better. The Spaniard switched around the defence after the sending off and didn’t seem quite as comfortable as the left-back in a back four. Monreal also conceded that penalty with the score at 2-0. 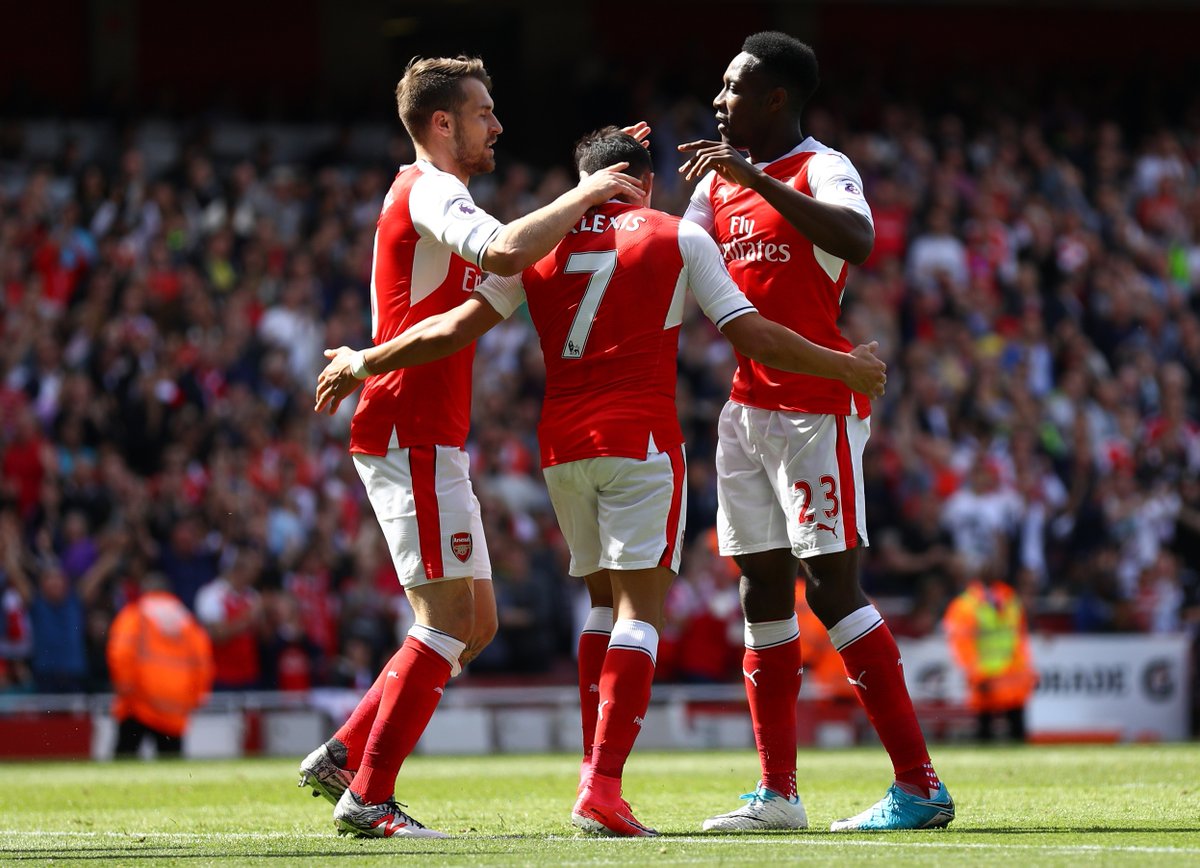 Mesut Özil played very well. The German broke forward brilliantly with the ball and made some incredible passes. It was Özil who cut it back for the first goal to cap an excellent piece of link-up play.

A decent performance from Alexis Sanchez. The Chilean did seem a little tired but still got his name on the scoresheet before being replaced. Hopefully, it was just fatigue and not an injury ahead of next week’s FA Cup final.

He was bright but missed a couple of big chances during his cameo.

Danny Welbeck will remember this match for those two chances he missed in the first 10 minutes of the match. The Englishman’s open goal miscue, fortunately, fell to the feet of Hector Bellerin to mop up.