Goals from Theo Walcott, Granit Xhaka and a brace from Alexis Sanchez were enough to seal a 4-1 win for Arsenal away to Hull. Alex Iwobi starred for The Gunners in an impressive performance which also included a missed penalty against the ten men of Hull City.

Both sides started the match well. Both were comfortable in possession but created little in the way of clear cut chances for the opening 15 minutes. Petr Cech raced out of his goal to stop Abel Hernandez and Alexis Sanchez skied his shot after a nice cut back from Theo Walcott. Walott had a hand in the breakthrough in the 17th minute. His ball in was saved by Jakupovic whose shot landed at the feet of Alex Iwobi. The Nigerian struck the ball into the ground and it took a massive deflection of Alexis Sanchez who claimed the goal.

Arsenal piled on the pressure after that. The best chance fell to Mesut Ozil who skied his shot from close range with the whole goal at his mercy. Hull crept back into the match as the first half progressed. Arsenal’s left hand side was a weakness which was exploited by the marauding Ahmed Elmohamady. The approach led to a good chance for Robert Snodgrass in the 35th minute but the winger could only find Petr Cech with his shot.

The game changed in the 40th minute. Francis Coquelin found space in the box and his shot hit the hand of Jake Livermore. The referee pointed to the spot and showed the former Spurs man a red card. Santi Cazorla has scored two penalties this season but Alexis Sanchez grabbed the ball and saw his shot saved by the keeper from 12 yards. Arsenal created a host of chances in the first half but just couldn’t add to the lead.

Arsenal started the second half slowly but made it 2-0 just before the hour. Alex Iwobi slipped the ball into the onrushing Theo Walcott who chipped the ball over the keeper. The points seemed safe but Hull made things a little nervous late on. Ryan Mason slid in debutante Mbokani who was taken out by Petr Cech. The referee pointed to the spot, Cech was shown a yellow card and Robert Snodgrass showed Alexis Sanchez how to take a penalty.

Alexis made it 3-1 a few minutes later. He slid in Theo Walcott whose shot was saved. The rebound fell to The Chilean who took his time and found the top corner. Granit Xhaka made it 4-1 late on when he hit an exceptional shot into the top corner from 30 yards to cap an impressive performance by The Gunners and three well-deserved points. 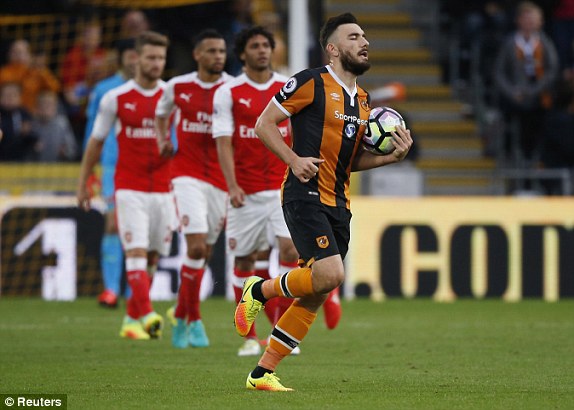 He made a couple of comfortable saves, distributed well but the blotch on his performance was that penalty. He was a little out of position and brought down the forward unnecessarily.

It was a fairly quiet match from Hector Bellerin. He wasn’t really needed for much of the match and was rarely used in attack.

He was slightly outshone by his defensive teammate but Laurent Koscielny wasn’t exactly relied upon during today’s match.

He started the match very well and stayed that way. It was Shkodran Mustafi’s best performance in an Arsenal shirt. The German attacked the ball well and barely put a foot wrong in a commanding display at the back.

A slightly better performance from Nacho Monreal. The full back did fairly well in defence during the first half despite being left a little exposed at times. In the second half he was a constant attacking outlet down the left hand side.