Leicester City were denied a late penalty as they battled out a 0-0 draw with Arsenal. There was little in the way of clear cut chances for either side.

There was very little in the way of action during the first half. Arsenal looked good in possession but failed to really threaten the Leicester goal. Alexis Sanchez would come short for the ball and vacate space which nobody really took advantage of. The main talking point came just before the half time break. Riyad Mahrez put Jamie Vardy clean through but was tackled by Petr Cech. Danny Drinkwater nicked the ball off the keeper but could only find Laurent Koscielny’s head with the Arsenal goal gaping.

The second half opened up a little bit but still provided little in the way of clear cut chances. Theo Walcott had a goal rightly ruled out for offside and Arsenal really perked up with Mesut Ozil, Olivier Giroud and Jack Wilshere on the pitch. Leicester were denied a penalty late on and missed a couple of decent opportunities through Riyad Mahrez and Jamie Vardy. 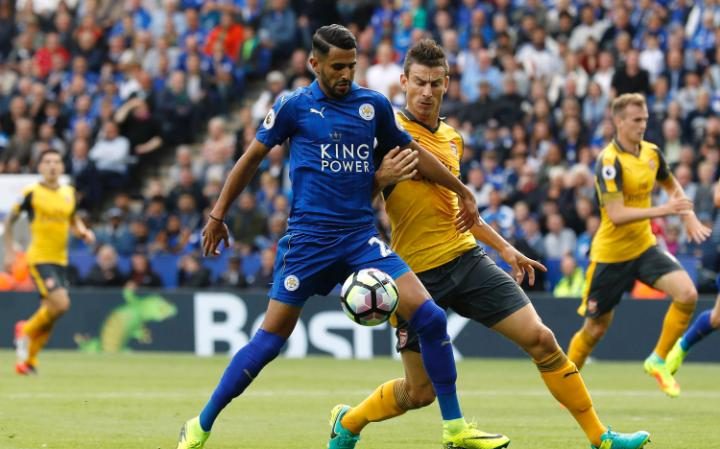 Nothing more than a few easy catches for the Czech stopper. Petr Cech even had time to show off his skills and take the ball past Jamie Vardy early in the second half. The Arsenal number one saved a point for Arsenal with an excellent stop to deny Riyad Mahrez late on.

Burst forward well and looked solid defensively. Classic Hector Bellerin performance but was very fortunate not to concede a penalty on Ahmed Musa late on.

Looked excellent in his first match of the season. Arsenal’s captain of the day was man of the match. An outstanding display. He was under every cross and behind every tackle for The Gunners.

Looked far more comfortable alongside Laurent Koscielny than he did with Calum Chambers last week. The youngster seems to have overtaken the former Southampton man in the Arsenal pecking order at the back. Holding was very impressive.

Another solid, probing performance from the Spaniard. Monreal once again showed his excellent positional sense and poor final product.