A late moment of magic from Mesut Özil capped an excellent comeback for Arsenal in Bulgaria. The Gunners went 2-0 down in the first 20 minutes but goals from Granit Xhaka and Olivier Giroud made it 2-2 before the German wrapped up the points and sent the Gunners nto the last 16.

The game started slowly but got frantic. Mesut Özil hatched the best chance in the early stages but failed to get any power on his shot after a whipped cross. After that, Arsenal seemed to collapse. The Gunners conceded a free kick 25 yards out from goal and failed to deal with the resulting cross with any conviction. Cafu (not that one) ghosted in and bumbled the ball into the net. Things got worse just a few minutes later. Cafu squared up against Kieran Gibbs and beat the left back easily. He slid the ball into the box and Keseru made it 2-0.

Arsenal fans were cursing November for all of five minutes before Mesut Özil came alive. The German reached the byline and cut it back for Granit Xhaka to sweep the ball home. The Gunners made it 2-2 just before half time when Olivier Giroud glanced an Aaron Ramsey cross into the back of the net. It stayed that way until the referee called time on the first 45 minutes.

The second half saw little in the way of chances for either side. Arsenal controlled the game a little better in the second 45 and the breakthrough came late. Mesut Özil latched onto a long pass from Mohamed Elneny, chipped the ball over the onrushing goalkeeper and then showed unbelievable composure. The German dummied the ball past the two remaining defenders before sliding it into an empty net after what felt like a lifetime. The Gunners killed the game after that and it finished 3-2. 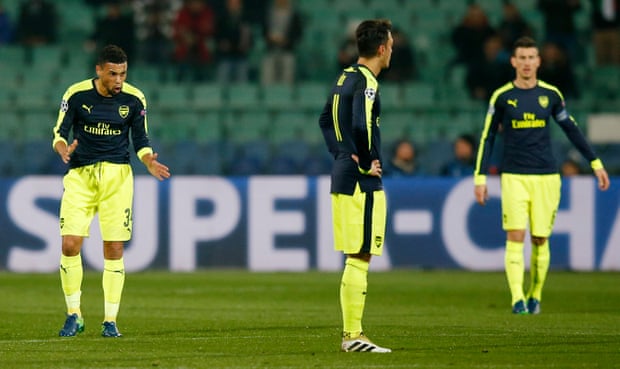 An unconvincing performance from David Ospina for the most part. He flapped at a number of crosses and hardly filled his defence with confidence. He made some good saves in the second half but by then the damage was done. Perhaps he could have done better for the first goal too – either through some better organisation or by claiming the loose ball.

He wasn’t the worst player on the pitch for Arsenal but it was a pretty low bar. Carl Jenkinson put in a decent performance and defended fairly well but offered little going forward.

He’s put in better performances this season. Laurent Koscielny looked a little off the pace on the night and was caught out on a number of occasions. He was caught too high several times and switched off a little too often.

The German was poor as well. Much like his partner, Shkodran Mustafi got caught up the pitch on a number of occasions. This was probably his worst performance since the match against PSG.

Kieran Gibbs was barely involved going forward and was poor at the back. The left back looked helpless for the second Ludogorets goal and will be disappointed with his night.