You may exercise your rights listed above by sending us an email to [email protected].

If you feel that your rights regarding data processing are violated, you have the right to lodge a complaint with your local data protection authority. Taking into account that we are Denmark based company, you may contact Danish Data Protection Agency as well: Datatilsynet, Borgergade 28, 5, DK-1300 Copenhagen K; email: [email protected]

Arsenal came back to secure a 1-1 draw against Manchester United at Old Trafford.

It was tight and cagey affair early on at Old Trafford, something which Arsenal fans haven’t been used to in recent weeks. It took a full 20 minutes for the first shot on target to arrive and it was Ricardo Perreira who forced a smart stop from Bernd Leno down to his left.

The Gunners kept things tight at the back but were wasteful on the rare occasion they found the ball in the final third. Nicolas Pepe had a half-chance when he forced David De Gea to save at his near post.

It took almost 45 minutes for the decisive moment to arrive but it eventually did. An Arsenal counter saw Bukayo Saka force a smart save from De Gea and the Spaniard was up quickly to deny Matteo Guendouzi on the follow-up.

Arsenal’s resulting corner came to nothing and United countered from it. The Gunners must have thought the danger had passed when Dan James’ cross was cut out. Instead, United regained possession and slid it back for Scott McTominay who took a touch before driving the ball into the roof of the net from the edge of the area.

The second half began and Arsenal looked a little more comfortable. The Gunners saw more of the ball and started to control the match. But they lacked a little creativity and Dani Ceballos entered the fray.

The second goal came soon after but it had little to do with the Spaniard. Instead, it was United who gave the ball away in their own area and Saka slid in Aubameyang. The Gabon striker chipped it past De Gea to score but the referee blew up for offside. VAR showed that Aubameyang was well onside and the goal was awarded.

Arsenal pushed forward in hopes of finding that winning goal and very nearly got it. A cut-back cross from Calum Chambers found Bukayo Saka whose powerful shot took a deflection off Victor Lindelof when De Gea was beaten.

The game petered out in the final 20 minutes. Both sides pressed on for the win but neither really had the ability to find it and it finished 1-1.

Brnd Leno had a good night. The German stopper made a couple of fine saves to keep his side in the match. The first stop of the night to deny Perreira was probably the best of all.

He started slowly but Calum Chambers really grew into this one. There was some fear that the Englishman would be taken through the wringer by Dan James – just like he was by Jefferson Montero several years ago. The early signs suggested as much but it was a composed and assured performance from the Englishman after that. He adapted his game despite the early yellow card and put in a good performance. 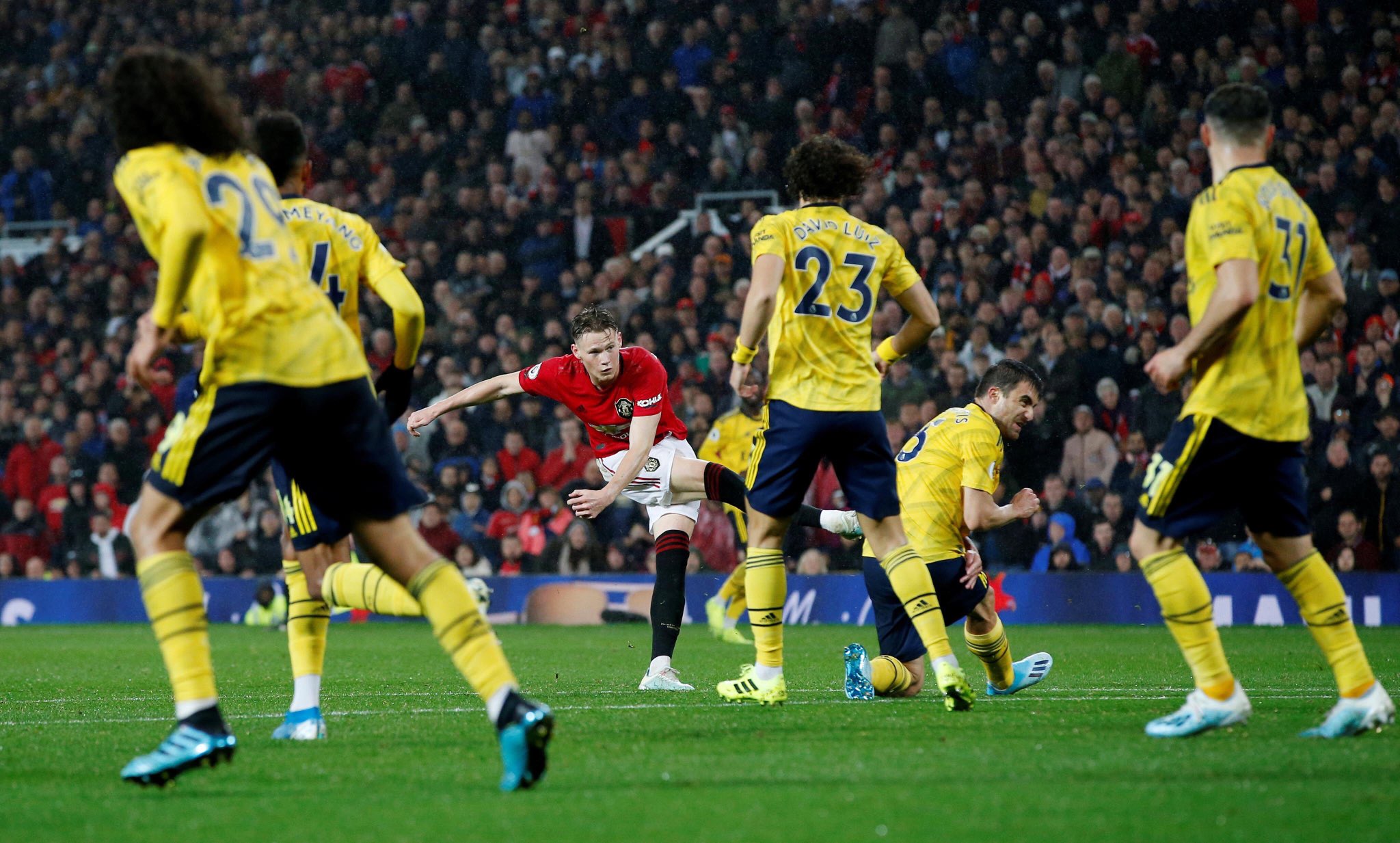 This was probably David Luiz’s best performance in an Arsenal shirt but he still didn’t play particularly well. The Brazilian had a few shaky moments on the ball early on but did grow into the match. He had a few good interceptions and cleared his lines well enough.

It was a better night for Sokratis Papastathopoulos. The Greek defender did well enough at the back and made a couple of vital headers.

He was poor. Sead Kolasinac almost cost his side on a couple of occasions with his inability to close down attacking players and some wayward clearances. He was a little fortunate not to concede a penaltyto cap it all.

Granit Xhaka hardly covered himself in glory in his first match as the official club captain. The Swiss international was slow and laboured in the first-half and will attract some criticism for his involvement in the United opener.

He did well. It was another all-action performance from Matteo Guendouzi in the centre of the park with the Frenchman popping up in all areas. He was tireless tonight.

He didn’t have his best match. It wasn’t the match for Lucas Torreira who struggled in the physical battle against Paul Pogba. The Uruguayan midfielder didn’t get much done defensively and had little opportunity to get forward with the ball.

He struggled to make an impact on the match.

He had a poor night. Nicolas Pepe struggled to get into the match and just looked unsure of himself all night. His passing was sloppy and he took it a bit too long to get his shots away and the ball moving. He’s a confidence player without confidence right now.

He looked pretty bright on the ball but most of Reiss Nelson’s work was defensive, covering down the flanks.

He was poor this evening. Pierre-Emerick Aubameyang grabbed the all-important goal but his overall performance was really poor. The Gabon striker couldn’t keep hold of the ball and was caught offside on far too many occasions. Fortunately, the one that mattered was overruled.

It was an impressive performance from Bukayo Saka. He was lively throughout and showed composure for the Arsenal equaliser. Still, he will look back on this match with regret after failing to convert that all-important chance at 1-1.

Joe Willock did a lot in a short space of time.