In a carbon copy of the Everton game in midweek, Arsenal went ahead in an away match only to drop to defeat against Manchester City. Theo Walcott gave the visitors the lead but Leroy Sane and Raheem Sterling secured the win for Guardiola’s men.

The game started openly and only got more open. Manchester City had the better of the early exchanges but it was Arsenal who took the lead. Alexis Sanchez played a wonderful through ball for Theo Walcott who found a gap between the two City centre-backs and made it 1-0 within five minutes. City almost responded instantly when Kevin De Bruyne played a fantastic cross for Raheem Sterling who steered his header well wide.

City began to control the game after that but looked vulnerable whenever the Gunners countered. Arsenal killed the game after that, slowing the tempo and keeping things compact in midfield. The Etihad crowd quietened down and the home side followed suit. There was little in the way of chances for either side for the remainder of the first half. Hector Bellerin blazed a long shot over the bar while Leroy Sane failed to find a final ball after some good work at the other end.

Half-time came and went but the Gunners didn’t seem to react. The crowd was dead but David Silva played a nothing ball over the top for Leroy Sane. Arsenal didn’t defend and the German just knocked it into the corner to make it 1-1. City began to control the game while the Gunners looked exhausted. The visitors couldn’t keep possession and Petr Cech was forced to make an excellent save to stop Sane from grabbing a second.

The Gunners barely got the ball in the opposition half and the home side did add a second just after the 70th minute. Arsenal were completely uninspiring in what was probably the worst half of football they’ve played this season. De Bruyne glanced a shot onto the post and Arsenal ventured into the City half a couple of times in the last 20 minutes but that was it as the game petered out. 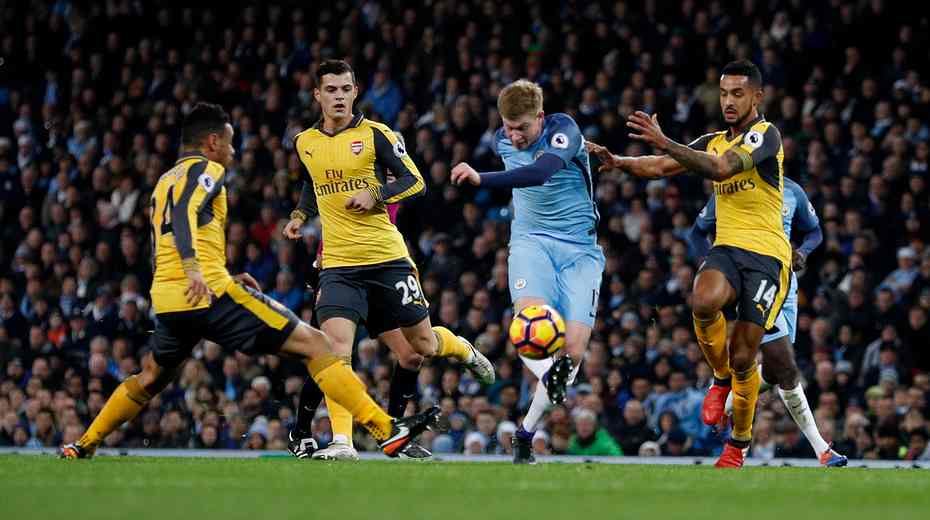 One of the few Arsenal players who can come out of this match with their heads held high. Petr Cech made some exceptional saves to keep the Gunners in the game but will be disappointed to be beaten at his near post for Raheem Sterling’s goal.

He was pretty good in the first half but really should’ve done better in the second. Laurent Koscielny was slow to close down Raheem Sterling for the second goal and his distribution was poor.

It was not a good performance from the Brazilian. Gabriel Paulista went rogue for the first City goal and struggled in possession. Shkodran Mustafi can’t come back quick enough.

The Spaniard was poor. Nacho Monreal really should’ve done better for Raheem Sterling’s goal and that capped a poor outing at the Etihad.