A late Olivier Giroud header snatched a point for Arsenal after a poor performance at Old Trafford.  The Gunners only had one shot on target in the whole match but the late header could prove to be a crucial result later in the season.

Manchester United dominated the early stages. Mourinho’s men pressed high and Arsenal struggled to get out of their half but the best chance in the early exchanges fell to the visitors. Theo Walcott flicked on a corner for an unmarked Alexis Sanchez who managed to fluff his header wide from five yards out. Arsenal began to control possession but couldn’t fashion anything in the way of a clear-cut chance.

United grew into the first half and were furious when they weren’t awarded a penalty just after the half-hour mark. Antonio Valencia burst past Nacho Monreal who slipped and held onto the right back. Both players went down but the referee waved play on, much to the dismay of Jose Mourinho. United created a couple of chance later in the half but Petr Cech was more than equal to them and it finished goalless.

The pace dropped to a crawl in the second half but Manchester United continued to press. The breakthrough came in the 69th minute. Paul Pogba played in Ander Herrera who cut it back for an unmarked Juan Mata who had the composure to slot the ball into the bottom corner.

It was toothless second half from Arsenal who failed to really threaten United until the last few minutes of normal time. The big moment came in the 89th minute. Alex Oxlade-Chamberlain burst past a tired Marcus Rashford and whipped in a wicked cross for Olivier Giroud to power it home. 1-1 with Arsenal’s first shot on target. 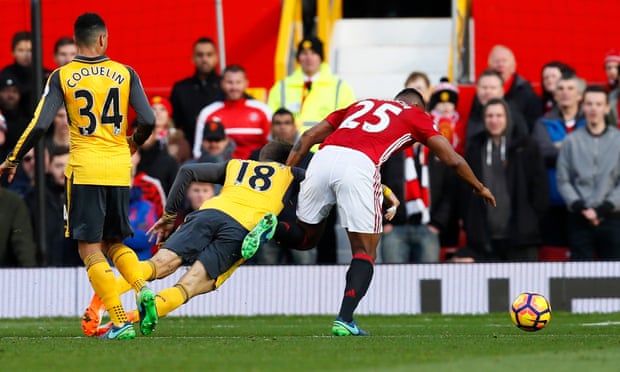 He made a number of key saves to keep Arsenal in the game in the first half. He made one to stop Juan Mata and another to stop Martial a little later on.

He was clearly nervous early on and was put under tremendous pressure by Manchester United. Carl Jenkinson did grow into the match and did well against Anthony Martial for the most part.

Didn’t really touch the ball until he put in that assist for Olivier Giroud but it was an exceptional cross from Alex Oxlade-Chamberlain.

It was a strong performance from Laurent Koscielny for the most part. Marcus Rashford barely had a sniff during the match and the Frenchman was good on the ball too.

The German put in a solid performance alongside his defensive partner. Shkodran Mustafi barely put a foot wrong on what was a disappointing Arsenal performance.

Nacho Monreal struggled the most of the four Arsenal defenders and will be disappointed with his role in the Manchester United goal.