A goal each from Alexis Sanchez and Mesut Özil was enough for the Gunners to get all three points and their first away win in five league matches.

Arsene Wenger surprised everyone by drastically changing Arsenal’s formation for what feels like the first time in years. The Gunners lined up with three at the back in a side which saw six changes from the team which lost 3-0 to Crystal Palace last week.

The Gunners looked a little uncomfortable early on, particularly in defence. The three centre-backs were spread very wide and there was a large gap between the backline and the Arsenal midfield. This gave Middlesbrough an opportunity to push forward and put a lot of pressure on this new look team.

However, it was Arsenal who created most of the chance in the first-half. Alex Oxlade-Chamberlain put in a number of threatening crosses from the right, one of which found Olivier Giroud at the back post. The Frenchman nodded it down for Aaron Ramsey to half-volley but the Welshman’s shot was headed wide.

The breakthrough came just five minutes before the break. Granit Xhaka won Arsenal a free-kick in a threatening area and Alexis Sanchez stepped up. The ball was central but from a comfortable distance and the Chilean had little trouble finding the far corner of Brad Guzan’s goal and the Gunners went into the break in the lead.

Half-time came and went but Arsenal probably wished it hadn’t. Just a few minutes into the second 45 and Alexis Sanchez had the ball at his feet in the Middlesbrough half. The Chilean tried to play it out to Oxlade-Chamberlain on the right wing but it was easily intercepted.

‘Boro countered quickly with Stewart Downing down the left. The former Liverpool man cut inside onto his left foot and played a wonderful cross into Alvaro Negredo. The forward got in behind Laurent Koscielny whose attempted clearance wasn’t anywhere near good enough as Negredo made it 1-1.

Just a few minutes later and the home side were almost in front but Petr Cech denied Daniel Ayala’s header from close range.

But the Gunners persisted and started creating chances. Alexis Sanchez fired one wide and Mesut Özil almost won a race with the ‘Boro backline and the German eventually had the last laugh. Aaron Ramsey ghosted past the home side’s defence and was found by Sanchez. The Welshman had his back to goal but had the presence of mind to chest the ball down for Mesut Özil. The German hit the half-volley first time and made it 2-1 which is how things remained. 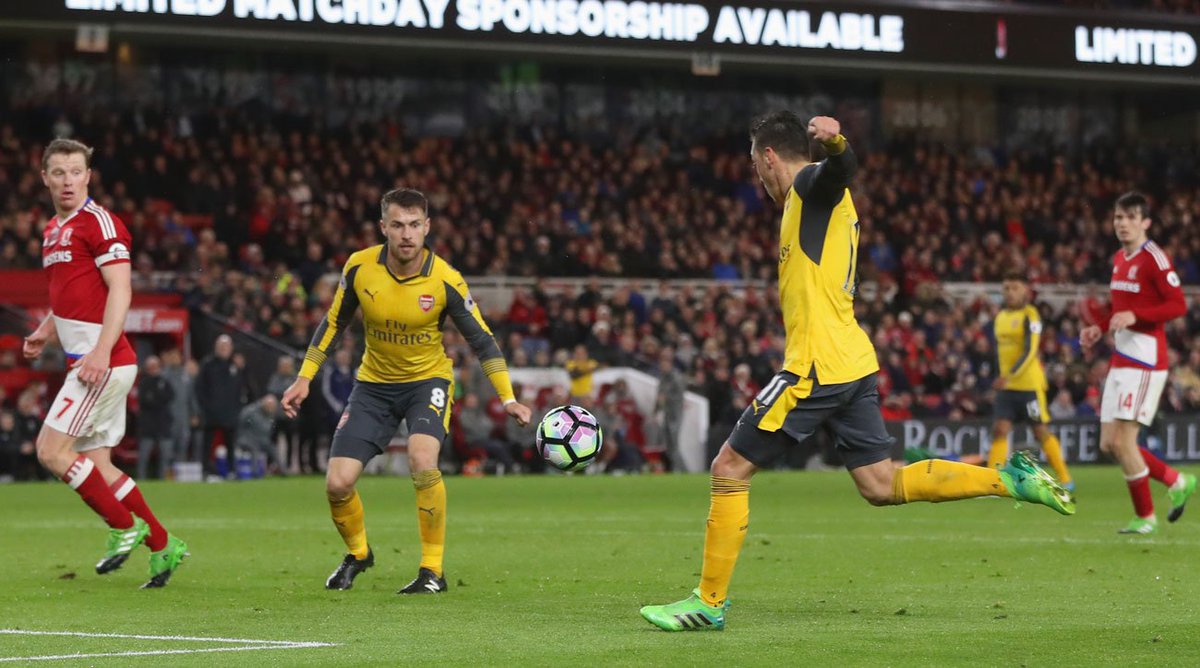 Just the one moment of note from Petr Cech this evening. It was good to see the goalkeeper’s name back on the team sheet and he made one excellent save to stop Daniel Ayala just after the hour.

It was a big ask for this defence against a side fighting for their lives. Gabriel Paulista looked a little uncomfortable at times in his new position but fortunately, the Gunners weren’t punished for it.

It was a new position for Laurent Koscielny as well, even though he was playing in the centre. It was good to see the Frenchman back in action but he really should have done better for the Middlesbrough goal.

It was Rob Holding’s first Premier League start since August and he did pretty well considering that. The Englishman looked a little shaky but considering his age and the fact he was playing a new position in a struggling team, he can’t be too disappointed.