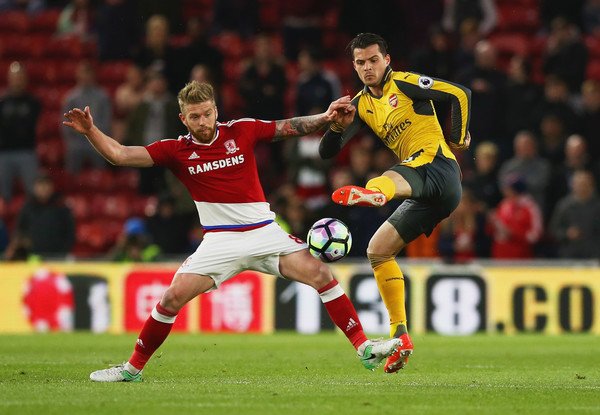 He was Arsenal’s biggest threat offensively in the first half. Alex Oxlade-Chamberlain tired in the second but he put in a number of excellent crosses into the Middlesbrough box. He was tested defensively but did well in this new position.

He seemed to struggle at times positionally. Granit Xhaka cut a lonely figure in the centre of Arsenal’s midfield at times and was put under a lot of pressure by the home side. However, the Swiss midfielder rarely gave it away.

He worked hard in the centre of the park and grew into the match. Aaron Ramsey’s best moment of the match was undoubtedly his knock-down for Mesut Özil to put the Gunners back ahead in the second half.

It wasn’t Nacho Monreal’s best match. The Spaniard was playing a new position and struggled to find the right balance. His final product was lacking offensively and he was caught out of position for Middlesbrough’s goal.

Arteta On Why He Dropped Lacazette For Dani Ceballos

Report: Guendouzi Was Dropped After ‘Heated Row’ With Mikel Arteta