Two goals from Alexis Sanchez and one from Theo Walcott were enough to see off AFC Bournemouth at the Emirates. Callum Wilson had equalised from the penalty spot for the Cherries but the Gunners took all three points for the first time in four matches.

The Gunners started well. It was the quick passing and high pressing which we haven’t seen in the last couple of matches. Alex Oxlade-Chamberlain threatened down the left and both Mohamed Elneny and Mesut Özil squandered chances. The breakthrough came in the twelfth minute. Bournemouth defender Steve Cook received the ball from the goalkeeper but his attempted pass back to Federici was massively under-hit. Alexis Sanchez seized on and rounded the goalkeeper before passing into the empty net.

Arsenal were flying and zipping their passes along the floor until injury struck. Mathieu Debuchy was just fifteen minutes into his comeback when he seized up and needed to be replaced. Gabriel Paulista took his place but the change seemed to hit Arsenal hard. Bournemouth came back into it and began controlling possession. Their breakthrough came just after the twenty-minute mark. Nacho Monreal was left one-on-one with Callum Wilson when the striker went down and the referee pointed to the spot. The decision seemed harsh but Wilson didn’t care, dusting himself off before making it 1-1.

The rest of the first half petered out with nothing but half-chances for both teams until stoppage time. Granit Xhaka found Alexis Sanchez in the box whose thunderous strike was tipped onto the crossbar by Adam Federici.

Arsenal started the second half as well as the first. The passing was crisp, the movement was dangerous and the Gunners didn’t have to wait long to reap the rewards. Mesut Özil stood the ball up to the back post for Nacho Monreal to volley a bouncing cross back across the box. Theo Walcott was left unmarked and did brilliantly well to steer his header into the back of the net.

Petr Cech made one exceptional save to deny Benik Afobe with the score at 2-1 but the Gunners made the points safe late on. Mesut Özil played in Olivier Giroud who played in Alexis Sanchez to find the back of the net. An excellent team goal to secure the three points for the Gunners. 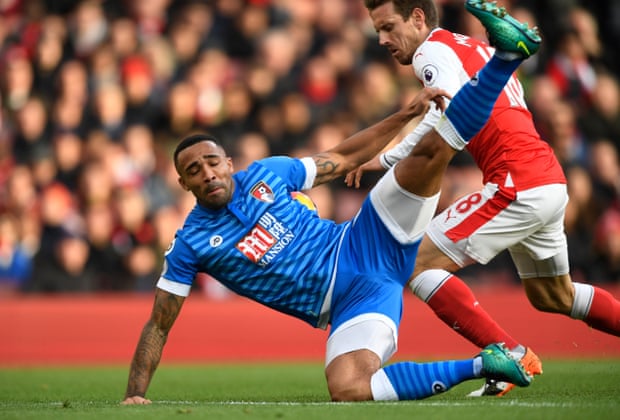 Made an excellent save to stop Benik Afobe late on but had a quiet match considering how many shots Bournemouth had on goal. Still, Petr Cech saved everything expected of him including that vital stop late on.

Poor Mathieu Debuchy. The Frenchman didn’t last twenty minutes during his return to the Arsenal team. It was a shame because the right-back started the match very well considering his absence.

He probably wasn’t expecting to come on and played out of position so it was a good performance from Gabriel considering.

A better performance from Laurent Koscielny. The Frenchman barely put a foot wrong all match and will be disappointed that his side failed to keep a clean sheet.

The German was also impressive. Shkodran Mustafi was impressive throughout and much like his defensive partner, will be disappointed with the Bournemouth goal.

No one will be more disappointed with the Bournemouth goal than Nacho Monreal. While the decision was a little harsh, the Spaniard was caught the wrong side of his man. However, Monreal more than made up for it with his excellent cross to find Theo Walcott for the second goal.