Arsenal lost 1-0 on the road to Stoke City after a goal from former Real Madrid and PSG man Jese on his Potters debut.

It’s been a place of disappointment in the past but the Gunners started brightly away in the Potteries, going in-line with the more recent record. The passing was slick and confident with Alex Oxlade-Chamberlain and Hector Bellerin looking particularly sharp out wide.

Stoke were playing an unfavoured 3-4-3 formation and it was giving Arsenal a lot of opportunities early on. Lacazette, Welbeck and both full-backs were able to find space in behind the Potters’ backline early on but the Gunners couldn’t create any real chances.

Both teams started to struggle to create chances as the first-half progressed. The Gunners had a couple of penalty shouts turned down while Stoke’s captain Ryan Shawcross pulled a free header well wide of Petr Cech’s goal.

Arsenal didn’t start the first-half anywhere near as lively as the first. Granit Xhaka gave possession away a couple of times within a few minutes of the second 45 minutes and the Gunners were punished.

Eric Choupo-Moting picked up possession on the Stoke left and under minimal pressure from Shkodran Mustafi, could pick a pass for new signing Jese. The former PSG and Real Madrid man lost Nacho Monreal with ease and easily put the ball past Petr Cech in the Arsenal goal.

Arsenal started to create chances after what was something of a wake-up call for the Gunners. Danny Welbeck missed a few chances before the most contentious moment of the match as far as Arsenal were concerned. Alexandre Lacazette got the ball in the net but it was ruled for offside. Replays show that the decision was harsh, to say the least.

It was frustrating but the Gunners only had themselves to blame for a poor ninety minutes.

He didn’t have much to do for large portions of this game but Petr Cech made a couple of decent saves with the score at 0-1.

Looked a little shaky early on in his first game back but grew into the match. Shkodran Mustafi should have done a little better for the Stoke goal but why was the German not in the centre of the back-three from the start?

He looked exposed at the centre of the Arsenal back three. Nacho Monreal was partly at fault for the Stoke City goal to cap what wasn’t exactly his best match in an Arsenal shirt. The sooner the Gunners get a first-choice defence back the better.

He’s played better. We probably won’t see the best of Sead Kolasinac until he switches to left wing-back and he struggled slightly in this back three.

Barely involved. There’s too much expectation on Olivier Giroud to keep coming up with winning goals.

Alex Oxlade-Chamberlain started at right wing-back and played the position well, especially early on. he seemed to tire as the game went on and waned in influence.

He was poor. Granit Xhaka lost the ball more against Stoke than he seems to have in the last six months. One of these lapses in concentration resulted in the important opening goal.

Aaron Ramsey was Arsenal’s best attacking player for large spells of this match. The Welshman drove forward well and just kept popping up in good areas for the Gunners. Unfortunately, Jack Butland was in the way of every shot he could create. 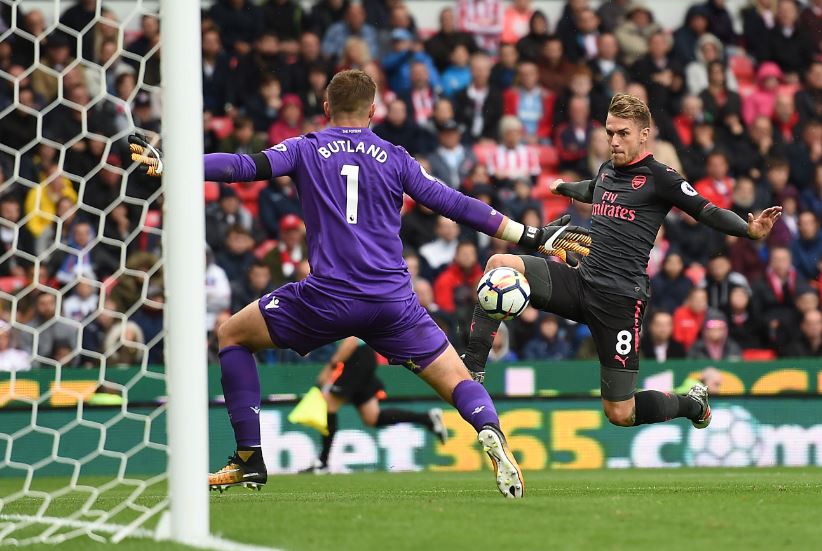 He did okay at his unfavoured left wing-back slot. Hector Bellerin was poor defensively in the first-half but much better going forward. He did okay at left-back after the Gunners switched to a back four but should’ve done better with his chances on goal.

He had a poor match. Mesut Özil was ineffectual before the Stoke goal and frustrating after it. His passing was inaccurate, his movement lacking and he couldn’t really get ahold of any of his shots on goal.

A performance which kind of summed things up for Danny Welbeck at Arsenal. His movement was excellent, his passing was good but he scuffed a couple of chances he should’ve done better on.

Some classy touches from the Frenchman up front in the first-half gave way to some really poor ones in the second. However, Alexandre Lacazette didn’t get a great deal of service and was very unfortunate to have a goal ruled out for offside.