Arsenal moved within one point of Liverpool in fourth place with a vital away win over Stoke City.

The first-half Arsenal dominated possession early on, a nice long ball from Mustafi put Stoke under pressure as Alexis went through on goal but was swiftly called back for offside, while Monreal rattled the post with a header after a good Bellerin cross.

The Gunners were patient however and managed to open the scoring with a neat, simple passing sequence from Xhaka to Coquelin who thread in Bellerin to cross simply for Giroud to net his second goal in as many games.

The second-half started off much the same and it took only ten minutes for the Gunners to double their lead after a very smart one-two between Ozil and Sanchez that resulted in the German chipping delightfully over a helpless Butland.

Stoke pulled one back however through Peter Crouch who hand-balled it home. Typical cheating Stoke who should’ve had the game stopped multiple times in the lead up for some fierce tackles.

But Alexis Sanchez kept up the intensity and netted a superb individual effort, before Olivier Giroud doubled his tally from Ramsey’s driving run. 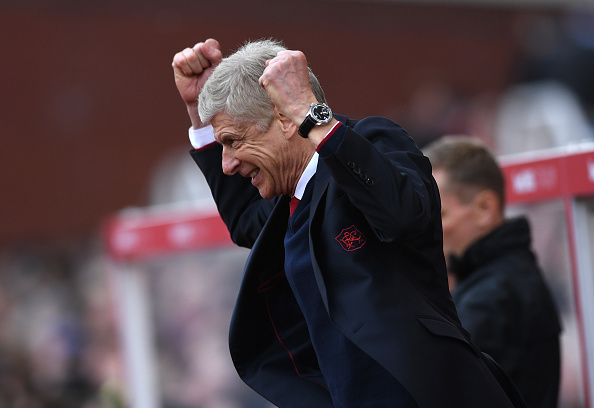 Was largely untested during two thirds of the match but was called into action on several set pieces and the odd long-range effort.

Holding played well once more despite picking up a needless yellow. Dealt with the heat of playing away from home and was a useful asset in the air on set pieces.

Interestingly played at the heart of the defence with Koscielny placed off to the left which seemed an odd decision given our captain’s reliability. Picked up a yellow for a rather rash sliding tackle on Shaqiri when he should’ve just stood up and should really spend less time rolling around on the ground. But overall a good performance against a physical Stoke attack.

Great to see the defender back in action and battled well at the back, his position allowed him a little more freedom to advance and intercept which does suit his game.

Now has over 100 games for Arsenal and lacked confidence but provided the vital assist after a delightful through-ball set him through to tee up Giroud for a tap-in. Still much more to come from the Spaniard.

Xhaka patrolled the midfield well and was strong in the tackle when required but also was very disciplined. Starting to show why we paid such a big fee for the Swiss.

A surprise inclusion in place of Aaron Ramsey but was a justified choice after a very effective performance from the Frenchman who put in several key tackles and was everywhere including picking a pre-assist for the opener.

A good attacking performance, his header clashed off the post and could’ve had two goals easily. Did little else for the remainder of the match as Arsenal were under more pressure, but this opened up more space for Ozil and co to stretch Stokes defence out wide.

Tried to get involved where possible however Alexis crowded his space and was unable to stamp his authority on the first half. But came up with the goods with a beautiful run and finish to double Arsenal’s lead.

Had one good chance in the first half which he skewed wide and was largely ineffective in the opening stages purely as he was so damn deep. However his deeper position paid off with an exquisite through-ball for Ozil to make it 2-0. Was very fiery in the second period and was instrumental in us pressuring and pushing Stoke. Netted yet another goal despite carrying an injury. Such desire and passion.

Almost scored with his first touch and was a menace with an assist for Giroud’s second.

Chosen to offer more physicality up front and was relatively quiet in the first half. But like all good strikers, he produced the goods when required, firstly a simple tap-in from Bellerin’s cross was all it took to open the scoring before half-time, and then netted his second after Ramsey’s cross.