Two goals each from Alexis Sanchez and Olivier Giroud helped the Gunners to a big win over Sunderland. The home side thought they’d got back into the match but late goals made the scoreline comfortable.

The first half started slowly. Arsenal seemed to be waiting for Sunderland to come knocking but when it didn’t come, the Gunners picked it up. The crowd quietened down and Arsenal started to control possession. The Gunners created a few half chances before the breakthrough. The 22nd pass of a lengthy Arsenal move saw Alex Oxlade-Chamberlain curl the ball in beautifully for Alexis Sanchez to nod it in. A wonderful goal. Chamberlain almost set up another a few minutes later when he played the ball over the top for Mesut Ozil but the German could only chip the ball into the goalkeeper’s hands.

Sunderland started the second half much better. They didn’t exactly create any clear-cut chances but their build up play was much better. The game changed on the hour mark. Alexis Sanchez burst into the Sunderland penalty area and seemed to have clearly been brought down by Sunderland defender Papy Djilbodji. The referee waved play on and just a few minutes later Sunderland were in at the other end. Duncan Watmore rounded the goalkeeper and Cech brought the winger down. Jermain Defoe blasted the penalty in and the game was all square.

Olivier Giroud came on for Alex Iwobi and it didn’t take long for the Frenchman to make an impact. Kieran Gibbs broke down the left and found Giroud who confidently swept the ball in. The Gunners then knocked Sunderland out with a couple of quickfire goals. First Olivier Giroud glanced a header from a corner before Alexis Sanchez turned and bundled the ball into the net. The Gunners killed the game after that and it stayed at 4-1. 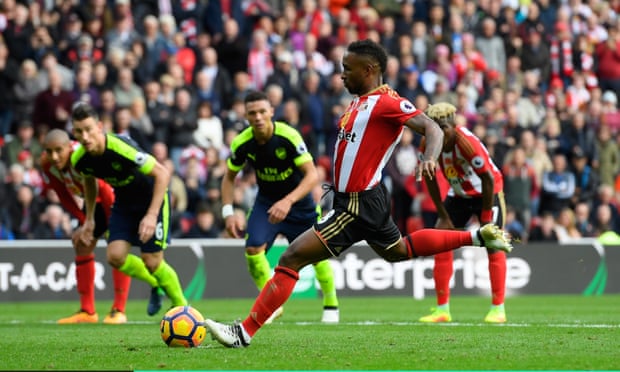 Petr Cech didn’t have a great deal to do before the Sunderland goal went in but he’ll be disappointed with the goal. Cech was caught a little bit out of position and brought down Duncan Watmore when the winger had overrun the ball. Still, his distribution was decent on the whole and he didn’t put a foot wrong for the rest of the match.

He linked up well in attack during the first half but quietened down in the second. Hector Bellerin remained solid at the back and put in another good shift.

A solid performance from Laurent Koscielny on the whole. Jermain Defoe was anonymous from open play and a lot of that was down to the Frenchman’s marking.

Another impressive performance from Mustafi. He really is forming a strong partnership with Laurent Koscielny and continues to complement the Frenchman.

A very good outing for Kieran Gibbs. The left back defended well, was a constant option down the left and put in an exceptional cross for Olivier Giroud’s first goal. The scoreline was comfortable but Gibbs’ cross came at a time when the game could’ve gone either way. He even came close to getting on the scoresheet in the run up to the fourth goal but his shot hit the post.