It was an exciting start to the match on a rainy night in South Wales. Swansea City certainly didn’t play like a side bottom of the table in the early exchanges of this match as they really took the match to Arsenal.

The Swans could’ve been a couple of goals up but for some fine defensive play from Aaron Ramsey and later Mohamed Elneny.

But it was the Gunners who took the lead. Mesut Ozil found some space on the edge of the box and curled in a wonderful cross to the back post. Nacho Monreal was the player rushing on and, incredibly, slid in to score.

But it wouldn’t last. Less than two minutes later and Swansea City were pushing forward. Alfie Mawson nicked the ball from Mesut Ozil before sliding a through ball into Sam Clucas to score.

The Swansea City defence sat back as the game entered the second-half and Arsenal struggled to break them down. The Gunners were forced out wide but had very little chance of winning anything aerially against the Swansea back three.

Henrikh Mkhitaryan was brought on just before the hour mark and came on just in time to witness Swansea City score. Nacho Monreal threw the ball back to Petr Cech in the Arsenal goal and his wild clearance only went as far as Jordan Ayew who made it 2-1.

Olivier Giroud may be the subject of much transfer speculation but was forced into making an appearance as Arsenal tried to force an equaliser.

Arsenal needed a goal but it wouldn’t be long before they needed two. With too many players up the pitch and some woeful defensive errors, Sam Clucas found space in the box to grab his second of the game and secure the win.

That could well have been the worst error of his career. Petr Cech won’t want to see the second Swansea goal again and, sadly, his performance will be remembered for it.

Hector Bellerin has had better matches. The Spaniard was caught a little too high up the pitch on a number of occasions and offered very little moving forward. 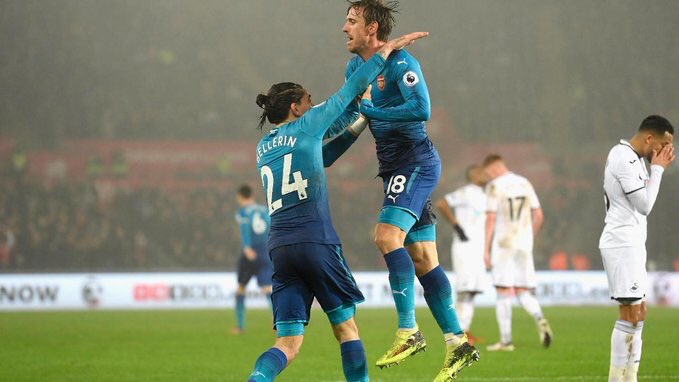 Shkodran Mustafi saw quite a lot of the ball but will be hugely disappointed with what he did with it. The German’s passing out from the back was poor and he was caught out of position on far too many occasions. An embarrassing performance.

He was okay. Laurent Koscielny suffered from the same errors as his defensive partner but not on the same scale. 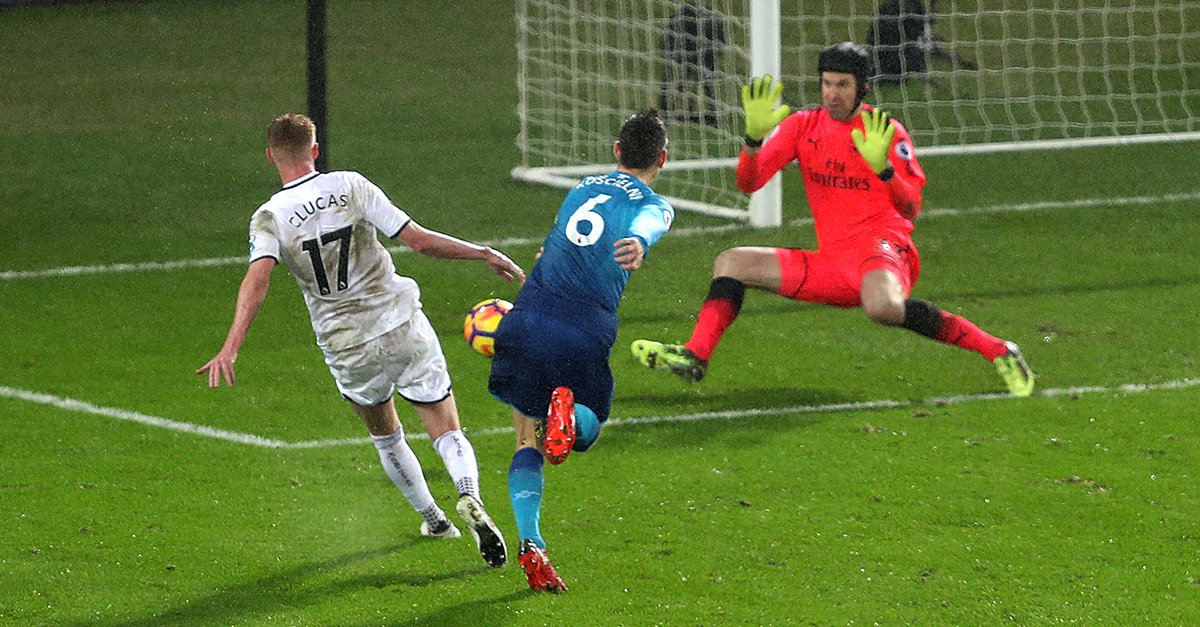 Nacho Monreal did well for much of this match. The Spaniard popped up with the important opening goal but was partly to blame for the defeat. His throw to Petr Cech was a little rash and his error for the third goal was unforgivable.

Granit Xhaka was really poor out there. The Swiss international was at fault for the opening Swansea goal and it just summed up his performance. He was caught out of position on far too many occasions and was just careless in possession.

Mohamed Elneny played well. The Egyptian was probably the strongest part of a weak Arsenal midfield and was unfortunate to be replaced.

It was far from the ideal conditions for a debut and it’s a match Henrikh Mkhitaryan will want to forget. He had some moments of quality but was ultimately left frustrated. 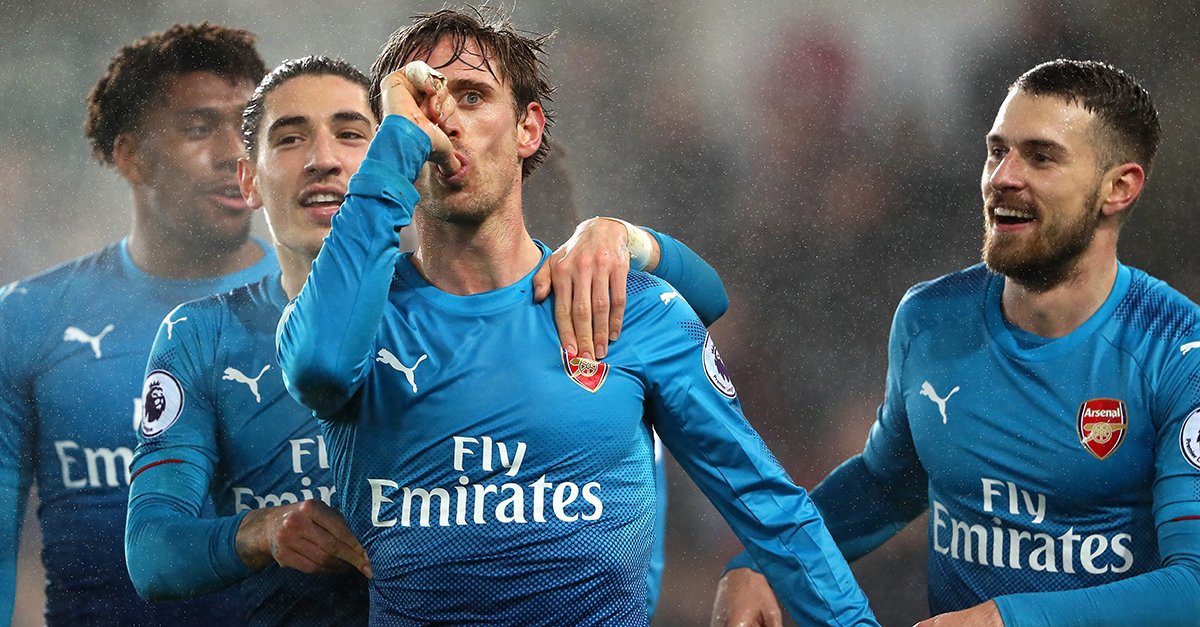 It was a tough afternoon for Alex Iwobi. The Nigerian had such little time on the ball against an organised Swansea defence. He wasn’t alone on that front but didn’t pop up with a crucial assist like Mesut Ozil did.

Didn’t see much of the ball.

Aaron Ramsey started in an attacking midfield role but didn’t spend long there. Ramsey put in one memorable tackle on his return to South Wales but had a relatively quiet match.

Much like Alex Iwobi, Mesut Ozil was anonymous for the majority of this match. He saw very little of the ball but still popped up with the sole moment ofqualityy from Arsenal in the first-half for that opening goal. 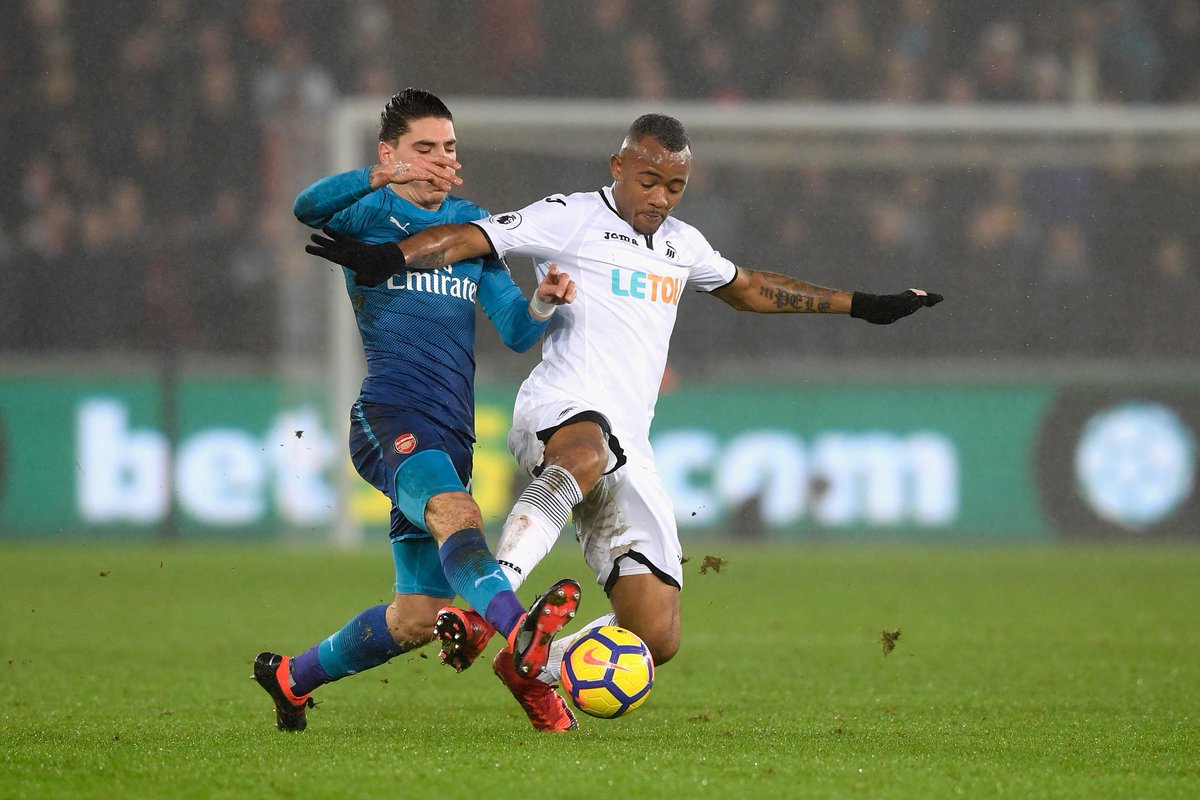 It was a very tough evening for Alexandre Lacazette. The Frenchman seemed to have four players marking him at times and he did not cope well.