Arsenal take on Ludogorets in Bulgaria later this evening without a number of first-team players. Nacho Monreal, Theo Walcott, Santi Cazorla and Hector Bellerin haven’t travelled with the squad so expect a number of changes to the Arsenal starting lineup. 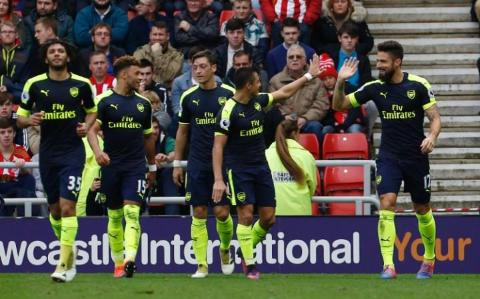 The Colombian should come back in for this Champions League tie. David Ospina has been very good between the sticks in Europe so far this season and will be hoping for more of the same.

The Englishman put in a good performance against Reading last week and with Hector Bellerin sitting this one out, Carl Jenkinson should get another start.

We expect Arsene Wenger to stick with his regular centre-back pairing. Laurent Koscielny continues to impress for the Gunners and will lead the side out once again.

Shkodran Mustafi will undoubtedly slot into the centre of defence alongside the Frenchman. Mustafi just keeps on performing for the Gunners.

With Nacho Monreal back in London, Kieran Gibbs should start at left-back once again. It’s a big opportunity for the Englishman who might even be able to take Monreal’s position for the North London Derby with a good performance this evening.