The transfer window closed on Wednesday night with the regular feeling of disappointment for most – Arsenal fans or otherwise. But Gooners can feel optimistic about the season ahead after a string of signings which has strengthened the team in all areas.

It feels like a long time ago but The Gunners started business early with the recruitment of Granit Xhaka from Borussia Monchengladbach. Arsenal fans were given an opportunity to see the Swiss midfielder in action for his national team at the European Championships and the 23-year-old did not disappoint. Xhaka put in a string of impressive performances and showed the sort of strength, power and finesse on the ball which was evident in his display at Watford.

Xhaka replaced a couple of outgoing players after Arsenal released a trio of fan favourites. Tomas Rosicky ended his ten year association with the club by returning to Sparta Prague on a free transfer while Mathieu Flamini concluded his second spell with The Gunners. The other big name player heading for the exit door was Mikel Arteta who retired from playing to become one of Pep Guardiola’s assistant managers at Manchester City. Youngsters Wellington Silva and Isaac Hayden were also sold to Fluminense and Newcastle United respectively.

Gooners were made to wait for another big name transfer but Arsene Wenger did bring in a number of younger players. Rob Holding arrived from Bolton Wanderers and has been impressive in red thus far. Meanwhile striker Takuma Asano was also signed before being loaned out to Stuttgart.

Also heading for the temporary exit door were Wojciech Szczesny who extended his loan deal at AS Roma and Joel Campbell who moved to Sporting CP for the season. Campbell’s departure was expected to make room for young Serge Gnabry. The talented youngster impressed immensely during the Olympics with Germany and was expected to sign a new contract at the Emirates but moved to Werder Bremen on Deadline Day permanently.

Another high profile player who will spend the season away from the club is Calum Chambers who completed his move to Middlesbrough. The former-Southampton man barely featured for the club last season and is in need of first team football.

Injuries to Per Mertesacker and Gabriel Paulista forced Arsene Wenger’s hand in early August and upped the need for another centre back. After weeks of speculation, Arsenal finally completed the £35 million signing of Shkodran Mustafi from Valencia with 24 hours to spare in the window. The German should be an excellent signing for the club, providing short-term cover and maybe even long-term stability.

Arsenal also finally signed a striker. Lucas Perez joined the club from Deportivo La Coruna in a deal worth around £17.1 million. Perez is a little bit more of an unknown but Gooners are undoubtedly pleased to have another option up front for the club.

However the biggest story at the Emirates on Deadline Day – and perhaps the whole summer – was the departure of Jack Wilshere. The midfielder left for AFC Bournemouth on a season-long loan deal which surprised everyone. The 24-year-old was coveted by two dozen other clubs including AS Roma and Crystal Palace before completing his move to the South Coast.

Once the shock of it all has died down, this should feel like a good piece of business for Arsenal. Wilshere needs to play consistent first team football above all else and he has a far better chance of doing that at Bournemouth than at the Emirates. The ideal scenario is that the Englishman will return in twelve months a fitter, stronger, better player. It’s a massive season for Wilshere who needs to prove that he can actually handle playing regular first team football.

Besides, Arsenal have Aaron Ramsey, Granit Xhaka, Mohamed Elneny, Santi Cazorla and Francis Coquelin to come into the centre of midfield. The Gunners are far stronger in that position than they were last season. Let’s hope that Wilshere lights up the Premier League for the next ten months and returns to the club a better player next season.

Overall I think most Arsenal fans will be pleased with the summer transfer window. While there was no marquee centre forward signing, the team has been strengthened throughout with some smart purchases. Mustafi and Xhaka are quality players and there is a lot of excitement about Lucas Perez. Another positive is that – with the possible exception of Serge Gnabry – Arsenal have made the correct decision with every player leaving the club. Let’s hope that there is enough quality in this squad to finally win the Premier League title this season. 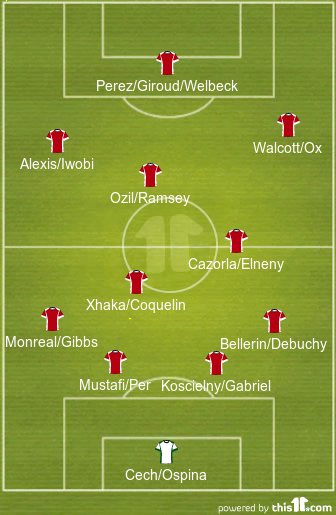