Goals from Lucas Perez and a landmark Theo Walcott strike helped Arsenal into the Quarter-Finals of the FA Cup. Sutton United’s fairytale story came to an end after a professional Gunners performance.

The ultimate David vs Goliath FA Cup match got underway in front of the lowest crowd an Arsenal first-team has played a match to since records began. Just over 5000 people were at Gander Green Lane to watch a decent start for the home side.

Sutton got into some dangerous positions early on, particularly out wide but seemed to lack the final ball. A number of the home side’s crosses were either over-hit or well off target. Sutton reached the 27th minute with their clean sheet intact and began pushing up the pitch and the Gunners capitalised. A long ball out wide found Lucas Perez in space. The Spaniard cut inside before hitting a low, curling cross-shot towards Theo Walcott. The Englishman tried to flick the ball but that didn’t matter. Perez’s ball in evaded everyone and curled into the far corner to put the Gunners ahead.

Half-time came and went and Arsenal made one change after the break. Alex Oxlade-Chamberlain replaced Mohamed Elneny who picked up a knock in the first 45. It made a difference to the Gunners.

Oxlade-Chamberlain drove the Arsenal forward from the centre of midfield but it was Lucas Perez who cut through the home side. The Spaniard picked the ball up on the edge of the Sutton area but squared it to his countryman Nacho Monreal. The full-back’s cross went all the way to the back post and an awaiting Theo Walcott. Arsenal’s number fourteen found the net for the 100th time in his Arsenal career.

Sutton started to come back into the match at 2-0. Roared on by a passionate Gander Green Lane crowd, the home side had a couple of opportunities which really should’ve been taken before the impressive winger Roarie Deacon smacked a 25-yard drive straight into the Arsenal crossbar.

Alexis Sanchez was introduced late on as the Gunners closed the game out to progress to the next round. 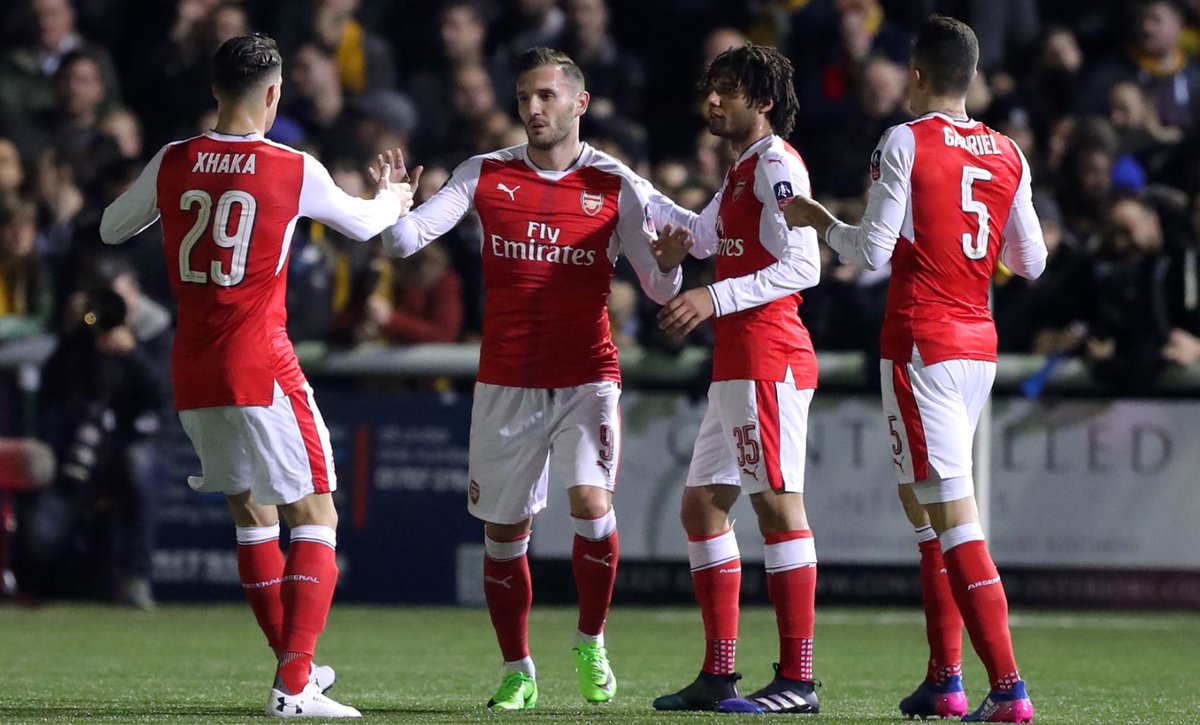 He had a pretty poor game between the sticks. David Ospina made a couple of straightforward saves but didn’t exactly fill his teammates with confidence. The Colombian flapped at a couple of crosses and even gave a goal kick straight to a Sutton attacker in the first-half.

The Brazilian struggled against winger Roarie Deacon but had a reasonable match on the whole. Gabriel Paulista offered little going forward but was solid enough, particularly in the air.

Barring a close call or two, he had a decent game at centre-back. Rob Holding was decent in possession and used his experience well after playing a couple of similar matches for Bolton Wanderers last season.

As the senior player in the centre of Arsenal’s defence, he put in a good performance. Shkodran Mustafi was solid in the air and kept the Sutton forwards quiet.

He spent most of the night camped out in Sutton’s half and laid a ball on a plate for Theo Walcott to get his 100th Arsenal goal. Nacho Monreal has had tougher games in his career defensively but did well.