Alisher Usmanov has claimed that he will not be holding any talks with Stan Kroenke over a potential sale of his Arsenal shares (via The BBC).

It would have been a huge blow for many Arsenal supporters had Alisher Usmanov accepted Stan Kroenke’s offer to buy out his shares.

Kroenke is the majority owner of the club but the reported £525 million acquisition of Usmanov’s share would’ve taken the American tycoon’s holdings up to 97%.

The American is a hugely unpopular figure with many supporters so naturally there was anxiety about his potential ownership. However, Alisher Usmanov has released a statement which will be music to the ears of Arsenal fans.

“I see my 30% stake as an important aspect in protecting the best interests of the fans in the club,” Usmanov wrote.

“My interest in Arsenal from the beginning was long term and my intention has always been to buy additional shares should they become available. 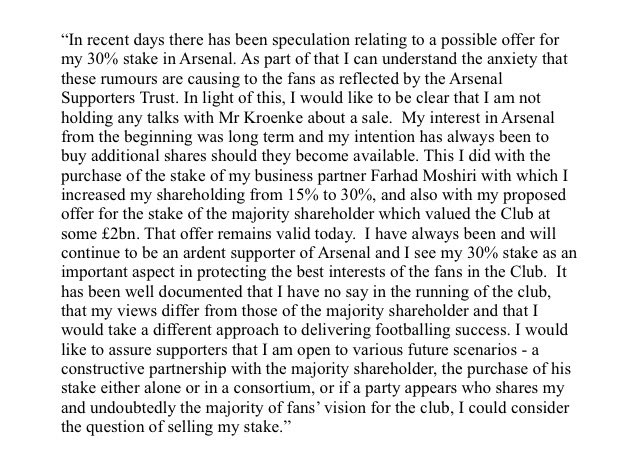 “I would like to assure supporters that I am open to various future scenarios – a constructive partnership with the majority shareholder, the purchase of his stake either alone or in a consortium, or if a party appears who shares my and undoubtedly the majority of fans’ vision for the club, I could consider the question of selling my stake.”

Usmanov said all the right things in his statement. The Uzbek businessman is vital in the long-term future of the club as an attempt to combat Kroenke’s awful leadership since becoming majority owner. Let’s hope Usmanov can deliver on his promises.