Arsenal ran out 3-1 losers to West Brom after another embarrassing performance and result for the club. Hal Robson-Kanu and two goals from defender Craig Dawson were enough for the Baggies despite and Alexis Sanchez equaliser.

The game started pretty openly with a couple of chances for both sides within the first five minutes. Allan Nyom fired one across Petr Cech’s goal before Nacho Monreal found space on the West Brom byline. The Spaniard’s fizzing cross was looking for the onrushing Theo Walcott but Ben Foster did well to intercept the ball.

Petr Cech palmed a stinging James McClean effort behind for a corner and the Gunners were made to pay. An inswinging delivery found an unmarked Craig Dawson just three yards out from goal. The defender had the run on the Arsenal backline and he made them pay past Cech.

1-0 down and the Gunners needed to respond quickly. From almost the next attack, Granit Xhaka picked up the ball 35 yards from goal. The Swiss midfielder lifted his head up and found an unmarked Alexis Sanchez at the back post. The Chilean had time to bring the ball down and cut inside before driving it past Ben Foster.

The game remained fairly open with Petr Cech making an excellent save to stop Darren Fletcher. Unfortunately, the Czech stopper seized up with an injury just a few minutes later and was replaced by David Ospina.

The first-half came to a close and while the Gunners started the second well, West Brom created the better early chance. Saloman Rondon couldn’t end his 12-game goal drought with a free header 10 yards out. He was replaced by Hal Robson-Kanu and the Welshman made an instant impact.

James McClean cut in from the left and found Jake Livermore who tried a chip over the top. The ball landed at the feet of David Ospina whose block fell at Robson-Kanu’s feet. He played it under the Colombian and through the offside James McClean’s legs. The Gunners protested but the goal was given.

Danny Welbeck came close to sparing Arsenal’s blushes later on but his header rebounded off the crossbar. With time ticking over, the Gunners repeated the same mistakes. A corner, some poor marking and a free run for Craig Dawson to make it 3-1. Game over for the Arsenal. 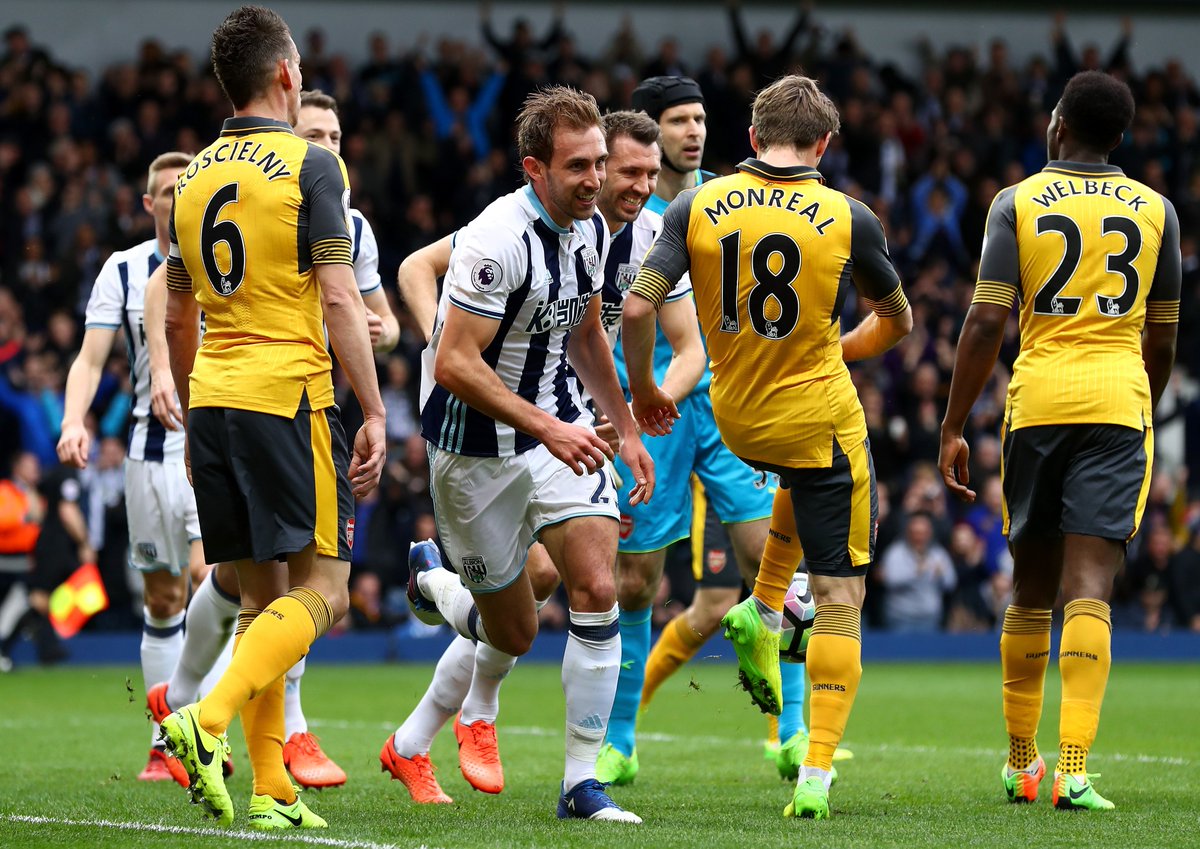 He lasted a little over half an hour but made a couple of decent saves. Petr Cech perhaps should have done better for the opening West Brom goal but made a particularly good stop after a Darren Fletcher shot.

He didn’t do very much but made a massive mistake for the second West Brom Goal. The ball seemed to bounce kindly at David Ospina’s feet and the Colombian made the unusual decision to lead with his shins. It fell straight to Hal Robson-Kanu to make it 2-1.

It was a pretty poor performance from Hector Bellerin. The Spaniard was outdone for the second West Brom goal to cap a very quiet performance going forward and a suspect one at the back.

He was caught out of position on a number of occasions and as the captain and leader of the defence, some blame for set piece marking should fall on his shoulders. Laurent Koscielny will not be happy with his performance and rightly so.

Much like his defensive partner, Shkodran Mustafi should carry some of the blame for the set piece goals. The German made a couple of errors defensively but was good on the ball moving forward.

A quiet match for Nacho Monreal. West Brom’s attacks rarely came down the Gunners’ left which gave Monreal a bit of an afternoon off. The Spaniard threatened offensively at times, particularly in the first-half.